"The Tempest" by Theatre Coup d'Etat at SpringHouse Ministry Center 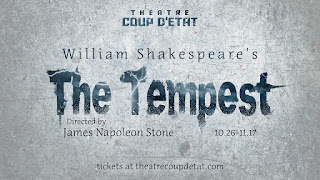 Wikipedia tells me that The Tempest is "now considered to be one of Shakespeare's greatest works," but I'd never seen it (everything I know about theater I learned from watching #TCTheater). Until this week. Theatre Coup d'Etat brings us a stripped down, one act, in-the-round, intimate production in the non-traditional theater space that is SpringHouse Ministry Center, where they've often performed. I found that I like the play, that ends neither with everyone dead nor everyone married, like most Shakespeare plays seem to (although one couple is betrothed). Furthermore, the moral of the story seems to be forgiveness and peace, which is quite a refreshing story to experience these days. In the hands of this wonderful cast 13-person cast, this clear adaptation with great use of space, physicality, and music is the perfect introduction to The Tempest.

For a full summary of the somewhat complicated plot of The Tempest, please see Wikipedia. In short, we have a banished duke Prospero, here played by and referred to as a woman, stuck on an island for 12 years with her daughter Miranda and their servant Caliban. Prospero has some magical powers, aided by the spirit Ariel, and uses them to cause a shipwreck that sees her enemies land on the island. Miranda falls in love, Prospero's enemies (including her brother, now the duke) plot more destruction, and a couple of fools have a good time. In the end, Prospero decides to forgive her enemies and free her servants. That's about as feel-good as Shakespeare gets. While not a laugh out loud comedy, this is definitely lighter than Shakespeare's tragedies, and includes some familiar likes like "what's past is prologue" and "we are such stuff as dreams are made on."

Director James Napoleon Stone and his 13-person cast do a great job of making the story clear and accessible. The play is performed in a beautiful high ceiling room at SpringHouse, the audience seated in just a single row of chairs placed in a circle. This allows the audience to feel intimately connected to the story and characters, as actors often look you right in the eye from a few feet away. There's really no weak link in the cast, beginning with the wonderful Meri Golden, embodying the strength, dignity, and compassion of Prospero. Other highlights include Stephanie Ruas and Clay Man Soo Sletta, sweet and charming as the young lovers Miranda and Ferdinand; Craig James Hostetler as the earthy and monster-like Caliban; Kelly Nelson, Mairead Emma Koehler, and Sophina Saggau as the ethereal spirits, singing in lovely harmony; and Madeleine Rowe and Kevin Fanshaw, portraying the fools with hilarious physicality.

There's really no set to speak of, or props, save a bundle of logs. The rest comes from the actors and our imagination. Subtle lighting and sound effects to help set the tone, along with the costumes - chic rags for the islanders and a classic modern style for the visitors, with cool make-up for the creatures (lighting design by Mark Kieffer, sound design Forest Godfrey, costume design by Chelsea Wren Hanvy).

This delightful, entertaining, and accessible production of The Tempest continues through November 17 at SpringHouse Ministry Center in Uptown.

"The rarer action is in virtue than in vengeance."