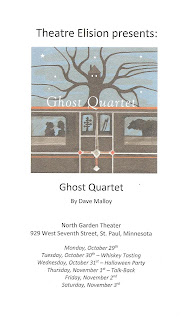 In their second full season, new-ish #TCTheater company Theatre Elision, which specializes in small cast female-focused rarely done or original one-act musicals, is bringing back Dave Malloy's Ghost Quartet from their first season. And judging by the audience reaction, they might be stuck doing this show every fall. First of all, this ghostly song cycle by the creator of Broadway's Natasha, Pierre, and the Great Comet of 1812 is a gorgeous, unique, interesting, creepy score. And secondly, Elision's production is really cool - immersive, participatory (the audience gets to play percussion!), performed by an excellent (and partly new this year) cast of singer/ actor/ musicians, and includes the serving of whiskey! It's a unique theater experience, musically haunting and beautiful, and an overall creepy cool vibe. This is my second* time seeing it, and I could definitely see it every year. It's playing through this Saturday only, with limited seating in the new North Garden Theater in St. Paul's West 7th neighborhood, so act fast! (Click here for info and tickets.)

Unlike Great Comet, Ghost Quartet doesn't have a lot of complicated Russian plot and characters to get in the way of the music. Rather, it's a song cycle, about ghosts and the supernatural, with a few recurring characters. Primarily two sisters named Rose and Roxy. Or Pearl. Or maybe they're mother/daughter, or daughter/mother, or lovers. Regardless, Ghost Quartet is two dozen or so really great songs in different styles, with little dialogue in between. Some of the dialogue is to introduce each song, some to tell a story or set the scene. Each song is an independent little story of its own, but all combine together to create a larger exploration of the theme.

Open for just over a year, the North Garden Theater is a cool space that doesn't look like a theater, rather a big open room with original brick and structure of the building exposed. For this show, the performance space is set up as a circle in the center of the room, bound by the performers' stations in the four corners with musical instruments galore (and whiskey!). Seating is at tables around the circle, and chairs beyond that. In the center of the circle is a chest set on area rugs, and performers sit at their stations or wander through the center as they perform. The staging is innovative and interesting, and the sound is fantastic in that space. Performers are miked this year but it's not too loud in the small space; it's done well to produce a really beautiful sound quality.

The other thing that provides for a really beautiful sound quality is this cast, along with music director Harrison Wade on keyboard. The quartet consists of frequent Elision performer and vocal director Christine Wade (the one returning cast member from last year), along with Kellen McMillen, Quinn Shadko, and Tristen Sima. All of them play multiple instruments - guitar, banjo, keyboard, violin, various percussion instruments, and more. And they all have really beautiful voices, individually and as a quartet. They each take on different characters throughout the stories/songs and are wonderful storytellers as well. True triple threats, all (except that the third threat is musician not dancer, there's no dancing). Credit also given to director/designer Lindsay Fitzgerald for the creepy cool look and tone of the show.


*Much of this post is adapted from what I wrote about last year's production.