"Iphigenia and Other Daughters" by Theatre Unbound at Gremlin Theatre 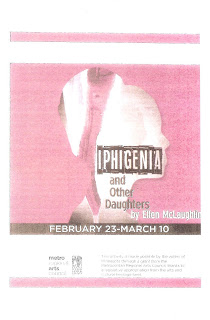 Playwright Ellen McLaughlin's play Iphigenia and Other Daughters, an adaptation of several ancient Greek plays about the tragic lives of the children of Agamemnon and Clytemnestra, premiered in the mid-'90s. But looking at the production history, there's been a spike in productions in the last few years, mostly at colleges. Perhaps we've recently become more hungry for these stories of women who take revenge on those who've wronged them. Theatre Unbound is bringing us the regional premiere of this modern retelling of an ancient women's story. In just a brisk 75 minutes, thanks to strong performances from the mostly female cast, we really get to know and empathize with these women.

In this story, the revenge is two-fold. First is Clytemnestra (Delta Rae Giordano), who plots to kill her husband Agamemnon (who does not appear in the play) after he sacrifices their daughter Iphigenia (Nissa Nordland) to the gods. The second is another one of their daughters, Electra (Samantha Joy Singh), who plots to kill her mother who killed her father for killing her sister. Where does this cycle of vengeance end? The play isn't a straight-forward narrative, rather it skips around in time, first showing us the sacrifice of Iphigenia (the terrified girl thinks she's about to be married off to someone), then years later Electra's despondence after the death of her father, as well as her sister Chrysothemis' (Sierra Schermerhorn) seeming indifference to the tragedies their family has endured. Finally, we witness the return of their brother Orestes (Henry Ellen Sansone) and the carrying out of the revenge against Clytemnestra. The play provides a possibility of a hopeful ending, as the family tries to heal and move forward.

The ensemble works well together, under the clear direction of Amber Bjork. In the Greek style, there is a five-woman chorus, their bodies covered in white with a draping of black fabric. They speak occasionally to provide narration or context, but their role is mostly to silently convey emotion and reaction to the story using movement and physicality, which they do well. The five actors playing named characters all give strong, sympathetic, truthful performances, individually and as a beautifully dysfunctional family.

The small thrust stage at Gremlin is decked out as an ancient Greek garden (scenic and properties design by Kezia Germ and Keegan Mahin). Vines hang from the ceiling, while short pedestals surrounded by greenery provide the only furniture. Alexandra Gould's costume design includes the aforementioned beautifully ghostly chorus outfits, as well as very different dresses befitting each woman, and Orestes' just home from war attire.

Similar to Park Square Theatre's Antigone (closing this weekend), Iphigenia and Other Daughters tells ancient women's stories in a fresh and modern way that's relatable today, making it obvious why these stories have survived for so long. Iphigenia continues through March 10 at Gremlin Theatre in St. Paul.