"The Government Inspector" at Theatre in the Round 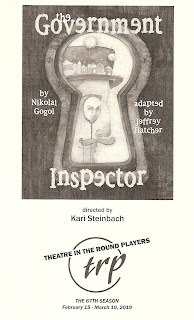 Jeffrey Hatcher's adaptation of the brilliantly ridiculous Russian satirical comedy The Government Inspector premiered at the Guthrie in 2008, featuring his usual dry wit and clever humor, and starring a bunch of beloved Guthrie actors and one Broadway star. I don't remember too much about it, other than the hilarity, and that yes, Hunter Foster (aka Seymour) did sing. While perhaps some of the jokes don't land as well in 2019, the idea of a narcissistic, greedy, corrupt politician finally getting what's coming to him is particularly appealing at this moment in time. Theatre in the Round's production, which closes this weekend, brings all the absurdity to life in a very entertaining way, with almost constant laughter from the nearly sold-out crowd.

A small Russian town begins to panic when word of a Government Inspector reaches them. All of the important men (yes, men, this is one of the things that doesn't feel quite right in 2019) gather to try to clean things up and be on their best behavior, under the direction of the mayor. At the same time, a lowly clerk from St. Petersburg has run out of money, stranded at the inn, and is mistaken for said Government Inspector. The mayor goes to visit him and offers him money, food, and a place to stay at his house, without really saying why. The clerk of course accepts, and even when he figures out why everyone is being so nice to him, continues to play along. Everyone is handing him money, why wouldn't he? He bets his servant that he can seduce both the mayor's wife and his daughter (another thing that's a little gross at the present moment), and they willingly go along. The mayor eventually finds out he's been swindled, but too late. It's hard to feel sorry for him when the townspeople complain what a horrible politician he is; having his money stolen, while still having to face the actual Inspector, seems fair comeuppance.

Director Kari Steinbach keeps the large cast moving in organized chaos in the small in-the-round space. The ensemble includes a group of musicians who play traditional Russian music and instruments before and during the show. And yes, there is a moment for "The Government Inspector" to sing as he woos the mayor's daughter. Andrew Newman is hilarious as the foolish foppish faux Inspector, and his medley of wooing songs is quite entertaining. The entire cast plays up the absurd exaggerated style of these ridiculous characters. Highlights include Mitch Geiken and David Denninger as the dimwitted twins who like to eat; David F. Dubin as the pompous mayor; Anna Olson as his ambitious and long-suffering wife; and Autumn Sisson as his daughter, with a very specific robotic walk, stance, and general disdain for life. But as great as this cast is, with over 20 people on stage, it's disappointing not to see even one person of color. This is no longer acceptable in this post-Hamilton world, especially for a theater located in as diverse a neighborhood as Cedar-Riverside is.

The Government Inspector continues through March 10.