"She Persists: The Great Divide III" at Pillsbury House Theatre 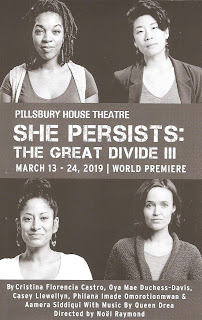 For the third year in a row, Pillsbury House Theatre is presented a collection of short plays that speak to our divided nation. The 2017 collection was subtitled Plays for a Broken Nation, 2018 was Plays on the Politics of Truth, and 2019 is an all-female collection/creation called She Persists. The series has been a really wonderful way to examine what divides us in a non-judgmental, non-threatening way, while offering a path towards hope and greater connection and conversation with each other. With most theater companies planning their seasons out a year or more in advance, it's difficult for them to immediately respond to what's happening in the world. But this series allows for that, with five brand new 10-minute plays that could not be more timely and relevant.


Some of these plays are funny, some sobering, some inspirational, and are all smart, thought-provoking, well-written, well-directed (by Pillsbury House co-Artistic Directer Noël Raymond), and beautifully performed by this four-woman cast comprised of some of #TCTheater's top talent (Ashawnti Sakina Ford, Audrey Park, Nora Montañez, and Sara Richardson). Each short but full story plays out on a mostly bare stage (with a fragmented map of the US on the stage floor) with a few essential props and set pieces (designed by Kellie Larson), the women are dressed in sharp mostly modern costumes that share pieces across plays (costume design by Amber Brown). DJ Queen Drea spins some tunes in the transitions between plays, keeping the momentum of the evening going.

Here's a brief description of each play.

I Voted by Aamera Siddiqui
On election day in a not too distant future which may or may not come to pass, a very pregnant woman is trying to vote. The well-meaning rule-following volunteer is giving her a hard time because her ID no longer matches her registration due to her recent divorce, and recent Voter ID laws and other restrictions have created so many hoops for citizens to jump through. A scary thought indeed.

The Team by Casey Llewellyn
Sara Richardson does a hilarious and spot-on Elizabeth Warren impression in this play set at the senator's presidential campaign headquarters. Her campaign manager and an intern are making signs when the senator comes in and asks to make a video with the intern, who just  happens to be black and have a large social media following.

Wade in the Water by Oya Mae Duchess-Davis
In the most somber piece, prisoners at some sort of prison camp discuss how they got to this place, and how they might get out of it; a very grim future.

May Yamoe by Cristina Florencia Castro
In this biting social commentary disguised as a comedy, three wealthy and privileged women take a Spanish class just for the fun of it, seemingly with no respect for the language, culture, or the harried teacher. It's funny because it's true!

Ascension by Philana Imade Omorotionmwan
This piece depicts the internal life of a modern woman. She's made up of three people - the go-getter career woman, the frequent exerciser who feels pressured to look a certain way, and perhaps what is the true self, who is so tired and just wants to watch the sun rise. It's a beautiful realization of what goes on inside the head of someone balancing the pressures that all women, especially women of color, constantly live with.

A common theme of the evening is the intersectionality of feminism. We white women need to be better about working with, not for, our sisters of color. These plays remind us that no woman is free until all women are free, and we have to work together to get there.

She Persists: The Great Divide III continues at Pillsbury House Theatre in South Minneapolis through March 24. Go see these new and necessary plays that hold a mirror up to the world we live in, for better or worse (ticket prices $5-$25).