"My Antonia" at Illusion Theater 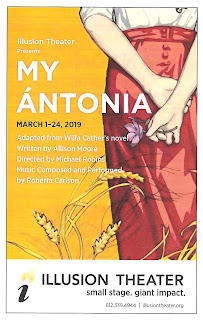 I missed Illusion Theater's original 2010 Ivey-winning production of their adaption of Willa Cather's 1918 pioneer novel My Ántonia, written by Allison Moore with original music by Roberta Carlson. But I've seen it every chance I could since, including my third time this weekend, as it returns home after a tour through Nebraska. Willa Cather is an important writer in American literature (see the notes in the program for more on that), and this is a beautifully sparse adaptation of her most beloved novel. The 90-minute runtime, a small ensemble of six actors playing all of the characters, and minimal set design really allow the beautifully descriptive language of the novel to come through as the main storyteller. Descriptive both of place (the Nebraska prairie) and of the emotions of the people who lived there. It's really a perfect adaptation, in that it captures the wistful and nostalgic tone of the novel as Willa describes the people and place she loved so much. If you've never seen it, do yourself a favor and get to Illusion Theater's 8th floor space in the Hennepin Center for the Arts (attached to the Cowles Center) in downtown Minneapolis before this run closes on March 24.

My Ántonia tells the story of a young immigrant girl in late 19th century Nebraska, through the eyes of her childhood friend Jim. The adult Jim narrates the story as he's returning home to visit, and his memories of his time on the frontier and the girl that he loves come to life on stage. We watch Jim and Ántonia grow from children playing on the prairie to young adults making their way in the world. Even though Jim and Ántonia's life paths diverge (he goes to Harvard and becomes a big city lawyer, she stays home and raises a family and a farm), they share a connection that cannot be broken by time or distance. Jim's nostalgia for the Nebraska prairie is inextricably intertwined with his memories of the girl that he knew and the boy that he was.*

A big part of the success and emotional impact of this piece is the music by Roberta Carlson. The three-piece off-stage orchestra provides a constant soundtrack to the story, and so specifically brings you to that time and place, tinged with memory. The language of the play (which I assume was largely taken from the book) paints such a picture I that almost wanted to close my eyes to better see it, but then I would have missed the simple but effective images of waving grass or a plow against the sunset projected onto the backdrop. The writing, acting, direction by Michael Robins, music, and images combine to create a feeling of nostalgia for a past I never knew, but that as a descendant of pioneer immigrants is in my bones somehow.*

Dan Hopman reprises his role from the 2014 production. He's a wonderful narrator as he brings to life the beautiful language of the novel, and also steps into the action to play various characters, culminating in adult Jim's reunion with adult Ántonia. The rest of the ensemble are new to the piece, all graduates of the U of M/Guthrie BFA program (or as I like to call it: the farm system). Annie Schiferl embodies the indefatigable spirit of Ántonia, from an enthusiastic young immigrant, to a strong pioneer woman. Ryan Dean Maltz also portrays the growth of his character, from 10-year-old Jim to college student leaving home and going off into the world. The connection between the two is strong, and is really the heart of the piece. Playing the multiple characters who fill out the world of Black Hawk, Nebraska are Corey Farrell, Olivia Wilusz, and Shae Palic, donning different costume pieces and accents to differentiate their characters.

Although set in the past, Willa Cather's story is still relevant today. It tells of hard-working immigrants who are the foundation of this country, and it's a women's story, despite the fact that the main character and narrator is a man. Jim Burton is based on Willa herself; she only made the character a man because of the conventions and limitations of the time she was writing in (more on that in the program as well). Both immigrant stories and women's stories are stories we're eager to tell and listen to in 2019.

I hope that Illusion Theater continues to bring back My Ántonia every few years, and I will continue to go see it. Beginning with the evocative language of the novel, and adding the beautifully sparse elements of production, it creates a picture so beautiful that it continues to bring tears to my eyes, no matter how many times I see it. But who knows if or when it will be back, so don't miss your chance to see this production (click here for more info and tickets, or here for discount tickets on Goldstar.)


*Some text borrowed from what I wrote about the 2014 production.