"The Hobbit" at Children's Theatre Company 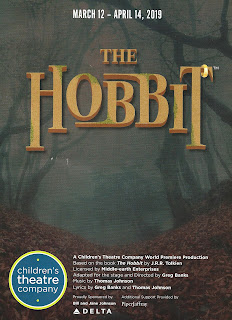 Children's Theatre Company proves that you don't need eight hours, the most advanced technology for visual effects, and 765 million dollars to tell J.R.R. Tolkien's slimmest and sweetest story about the unlikeliest of heroes in literature. You can do it in just two hours with five actors, two musicians, and a whole lot of heart and imagination. The new adaptation of The Hobbit by playwright/director Greg Banks (who shockingly had never read the book before beginning this project), with music by Thomas Johnson, is a wonderful way to bring this story to new audiences, as well as delight Tolkien enthusiasts like myself with the inventive storytelling of a familiar and beloved story.

The Hobbit is a story of adventure and friendship, and this adaptation brings both of those alive. The play begins and ends with Bilbo Baggins sitting in his armchair sipping tea, and in between is the greatest reluctant adventure of his life. He risks his life for his new friends - the wizard Gandalf, and dwarf king Thorin Oakenshield and his kin - while battling goblins, spiders, elves, and a big old mean dragon. It's the classic hero cycle, with a hero we can see ourselves in (who hasn't wished they were at home in their favorite chair drinking hot chocolate?!). In just two hours the play covers all of the major events of the book; just when you think they won't be able to fit it all in, they do. Not rushed, but not spending too much time on any one thing as we journey towards the Lonely Mountain (Peter Jackson* could learn a thing or two about endings and succinctness).

I received The Hobbit for my 12th birthday and have read it countless times in the 30+ years since, and of course I've seen Peter Jackson's fantastically bloated movie trilogy, but I've never experienced the story like this. The playwright wisely chose to tell the story with just five actors, requiring much inventiveness and agility of the actors to embody the 13 dwarves, a hobbit, a wizard, elves, goblins, wolves, oh my! Tolkien's work is noticeably absent of female characters, but this production casts two women and three men, referring to the women's characters as she, but not changing them at all. They're just women, because sometimes wizards and dwarves and heroes are women too.

This small but mighty cast is genius in becoming these characters and creatures, with little in the way of costumes to help. Dean Holt only plays one character, Bilbo Baggins, but is just delightful as the somewhat bumbling but well-meaning and ultimately heroic hobbit. Reed Sigmund is a fearsome Thorin, easily transforming into a goblin or wolf or whatever else is needed, as does the rest of the cast. H. Adam Harris is a charming Kili the dwarf, with a commanding presence and vocals as the dragon Smaug. If you didn't know Becca Hart before, you will now, making her CTC debut as Thorin's right-hand-dwarf Balin and the dragon-slayer Bard (80-year old spoiler alert). Saving the best for last, Joy Dolo is everything you could want in a Gandalf, except a bearded old white man, and who wants that anymore?! She doesn't try to fit into our image of Gandalf, she just IS him, or her, with all of the character's humor, mystery, and wisdom. If that's not enough, she's also an Elven Queen and a creepy crawly Gollum. If you're wondering who plays all of the other dwarves - if you're sitting in the front row it might be you!

The whole cast is very physical, both in their characterizations of the various creatures, and in the way they climb over, under, and through the set. If you're wondering how they create all of the varied fantastical locations of the book on stage, the answer is simply, and with imagination (again, Peter Jackson*, sometimes less is more). A series of platforms and scary looking stairs climb to a tower in the center of the stage; the kind of plank stairs you fall through in your nightmares, and they do jump down between the stairs as they're in various caves, tunnels, and woods. As I mentioned, the actors are not dressed in elaborate wigs, prosthetics, and costumes that look exactly like these creatures. No furry hobbit feet, no long fake beards. Rather they're all dressed in shabby chic travel wear (I need a pair of those multi-pocketed pants for my next hiking trip), Bilbo a little more, well, hobbit-like, Gandalf with a long coat. Actors transform into goblins by donning round goggles, wolves with wire snouts, Gollum with a frog-like hat with glowing eyes. (Scenic design by Joseph Stanley, costume design by Annie Cady.)

Did I mention there's music? I wouldn't call this The Hobbit: The Musical! There are maybe a half dozen original songs, brought in at a few key moments to heighten the emotion of the scene, as music should be used. It feels more organic to the story than a dialogue-song-big finish-applause-repeat kind of traditional musical. Just two onstage musicians (CTC's resident Music Director Victor Zupanc on piano, etc., and Bill Olson on woodwinds) accompany the cast as they sing.

Thorin turns into a bit of a jerk at the end once he reclaims his family's treasures, wanting to protect it, himself, and his people from the evils of the world. But in doing so he also shuts himself off from potential allies. He soon learns that different peoples and cultures are not the enemy, and that we're stronger together. A lesson this world sorely needs. "If people cared more about food, cheer, and friendship than gold, it would be a merry world."

The merry, scary, inventive, and entertaining world of The Hobbit continues on the Children's Theatre stage through April 14. Isn't it time for an adventure?

*I jest, but I love Peter Jackson's adaptation of the Lord of the Rings trilogy so much that I went to New Zealand. And talking about it just makes me want to binge watch all 12 glorious hours.