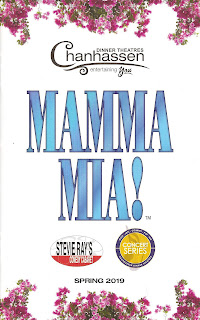 I fell head over heels for the Ordway Original production of Mamma Mia! last summer, calling it "fantastically fun and surprisingly moving, performed by a mostly local and all fabulous cast." So when I heard that Chanhassen Dinner Theatres had chosen it as their summer 2019 production, I thought, so soon? why? The answer is that it's an inherently fun and feel-good show show, and while the Ordway production still holds a special place in my heart, it only ran for two weeks and the Chan reaches a much larger out-state audience. There's room for two big, beautiful, fantastically fun Mamma Mia!s in this town. What I love most about this show is that it's very female-forward. Yes there are male characters, but it's truly about the women's stories. Better yet, it's about women loving and supporting each other, not competing with each other. The true love story at the heart of this piece is the love between parent and child, the love of lifelong female friendships. I can't think of any better message to celebrate this summer.

Maybe it was just the high of the super fun high energy show, but watching it I almost thought the book was kind of clever in the way it weaves ABBA's greatest hits into the story of a young woman in search of her father. These silly pop love songs sort of make sense for these characters to be singing, and are almost kind of deep at times. But that can't be true, can it?! I totally fell for the story of young Sophie who, on the cusp of her wedding to the handsome Sky, reads an old diary belonging to her single mother Donna in which she finds three possible candidates for the father she never knew, and invites them all back to the Greek island where Donna runs a resort. Hijinks ensue as Sophie tries to figure out which man is her dad, while keeping it a secret from them and her mother. Add in Sophie's two best friends and Donna's two best friends, and you have a lot of boisterous fun. The search for dad doesn't go as expected, but in the end what matters is the family that's always there for you, no matter what DNA may say.*

Director Michael Brindisi is an expert at managing these big shows on the Chan's stage without it ever feeling crowded or chaotic. He also makes great use of the entire theater as actors enter and exit through the audience, with a post-curtain call audience dance-along. He keeps the tone fun and energetic, with pauses for those quieter poignant moments.

Everyone in the gorgeous and talented 28-person ensemble is a joy to watch, but as the song says, the winner takes it all - and the winner is Kersten Rodau as Donna. She has a dynamite voice that's perfectly suited to belting out these '80s pop tunes with believable emotion. As her besties, Michelle Barber is chic, funny, and sexy (I want to be her when I grow up), and Therese Walth is as always a delight (even if she is too young for this role and too talented to be stuck in the comic sidekick lane). Jessica Frederickson sings and emotes like a dream as Sophie, and her familial connection to Kersten Rodau's Donna is palpable. As is that with her real-life husband Aleks Knezevich as Sophie's fiance Sky; they're so sweet and believable together, playing a couple onstage I believe for the first time since Theater Latte Da's exquisite The Light in the Piazza six years ago.

Sophie's potential dads include Michael Gruber, so lovely as former headbanger Harry, crooning "Our Last Summer;" the always hilarious Jay Albright as Bill, bringing the audience to tears of laughter just by standing at center stage mugging, yet also bringing out the tenderness of the character when he finds out he might be a dad; and John-Michael Zuerlein as a strong and sympathetic Sam, returning to #TCTheater after 16 years performing elsewhere, including three years in the national tour of Mamma Mia!.

The Chan's dream team of creative/designers shines again here. Andrew Cooke returns to the Chanhassen as the Music Director, leading the nine-person onstage band through this fun and poppy score. Tamara Kangas Erickson has once again created some infectious and highly energetic choreography (with flippers!), performed with enthusiasm by the ensemble. Scenic designer Nayna Ramey has brought the Greek islands to suburban Minnesota, and Rich Hamson has created a wardrobe so fun and summery that it makes one long for the days of wearing shorts and bathing suits.

My favorite line in the show is spoken by Michael Gruber's Harry, something like, "there are all kinds of families in the world. Yours [Sophie] is you and your mom, mine is me and Nigel." That's such an important story to tell. Family is not defined by DNA, but by whom we choose to love and live our lives with. I also love that Mamma Mia! (notably conceived and written by women) celebrate's women's choices. The choice to have a baby alone, or with someone else, or to not have babies. The choice to get married three times, or to not get married at all. The choice to run a beach resort by yourself, travel the world, or live a more traditional lifestyle. Now 20 years after its West End premiere, Mamma Mia! may be more relevant and necessary than ever.

Mamma Mia! continues at Chanhassen Dinner Theatres through the awakening of spring, the heat of summer, and the beginning of fall as the air turns crisp and the leaves begin to fall. But regardless of the weather outside, it will continue to be a fun and breezy beach resort on the stage, with a message of love, family, and female friendship.

*Plot summary borrowed from what I wrote about the Ordway production last year.