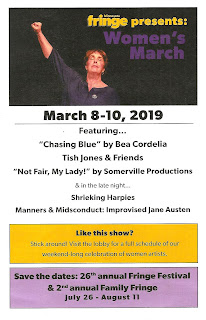 It's not August (the 75 feet of snow outside your door should tell you that) but that doesn't mean there's no Minnesota Fringe happening! In fact, they have at least one event every month through the festival dates of August 1-11 (and maybe after). In January, I attended the first Drafts and Draughts - readings of new works by Fringe companies, accompanied by local brew. In February the Fringe lottery was held (you can download a list of companies at the Fringe website). And this month brought us a mini-Fringe Festival called "Women's March," showcasing work by female-identifying artists. A few events were cancelled due to the umpteenth snowstorm of the winter, but it didn't stop the festival entirely. I attended two shows, and found it to be a wonderful event. The concept of a mini-Fringe at different times of the year is a fun one, so I hope they continue it. In the meantime, you can click here to see the full 2019 event list, including more Drafts and Draughts, free outdoor performances, and the annual Five-Fifths fundraiser. Yay Fringe!

Here are a few brief thoughts on the two Women's March shows I saw:

Chasing Blue
Six months after Bea came out as transgender during the most upheaving era of her life, she has just one hour to get ready for an approaching first date.
Using original projections, stunning lyricism, and a real-life on-stage bathtub replete with water, this show's multidisciplinary approach to intimate storytelling is a must-see.
Written and performed by Bea Cordelia, Directed by Andrew Hitzhusen
My thoughts: Starting the show naked in a bathtub, Bea talks to the audience about her journey in a way that is completely disarming and so sympathetic. She's getting ready for a date, inviting the audience into the bathroom of her mind, as she tells us about past relationships and personal discoveries. She uses music, video projections, and poetry that is indeed stunningly lyrical to tell her story. It's impossible not to feel for transgender people and the difficulties they face in just being themselves in the world, as seen through one specific and very open and honest trans woman.

Not Fair, My Lady!
This all woman, company-created musical theatre parody review is an expanded version of the 2018 Festival favorite! It's 2019, and misogyny is alive and well on Broadway. And the world. Everywhere. Let's sing about it!
Created by Shanan Custer, Anita Ruth, & Colleen Somerville
My thoughts: This is a remount of my favorite 2018 Fringe show about the misogyny in musical theater, with a new epilogue focusing on the specific misogyny of Guys and Dolls, that I can't get enough of. As I wrote last summer: "there are so many "classics" in which women's roles are limited and stereotypical, a fact that's startlingly obvious in a couple of montages of snippets from a wide variety of musicals new and, well, mostly old. There are also a couple of familiar songs with new lyrics that talk about the problem, and also about what it's like to be a women working in musical theater, particularly women of color, and women who are bigger than size 2 or older than 25. A fabulous and diverse cast of seven talented women (Colleen Somerville, Courtney Miner, Falicia Nichole, Kecia Beth Stimmler Rehkamp, Marcie Panian, Rue Norman, and Suzie Juul) beautifully perform the funny and insightful songs and sketches, and also speak about their own experiences in a meaningful way. I couldn't love this show more and it couldn't come at a better time. Women can write musicals too!"