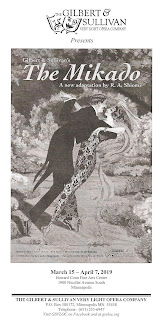 This long winter is beginning to transition into a very wet spring, which means it must be time for The Gilbert and Sullivan Very Light Opera Company's annual production of a Gilbert and Sullivan classic comic opera. GSVLOC has been around for 40 years, but this is just my 5th year attending their spring show. I love G&S's fast, witty, joyful operas, and GSVLOC does them well with a huge cast and orchestra. This year they've partnered with Rick Shiomi, directing his adaptation of The Mikado which removes the Japanese stereotypes and modernizes some of the songs. G&S were famous for their biting social commentary, so I'm all for updating their shows to include more relevant social commentary, remove the offensive bits that no longer play to today's audience, but keep the things we love about the original (see also Park Square Theatre's Pirates of Penzance). This Mikado welcomes in the spring "with laughing song and merry dance."

When Rick Shiomi was Artistic Director of Theater Mu (one of the best Asian-American theater companies in the country, which he founded in 1992), he re-imagined G&S's The Mikado, presented in partnership with Skylark Opera as a part of their now defunct Summer Festival in 2013 (but if you're a fan of reinvented, accessible opera, check out Skylark's upcoming production of Mozart's Cosi Fan Tutte). One of their most popular works, G&S set The Mikado in Japan, which "allowed Gilbert to satirise British politics and institutions more freely by disguising them as Japanese" (Wikipedia). In doing so, they also play on stereotypes of Japan, and many productions throughout its history have employed yellowface (casting Caucasian actors as Asian characters). Rick has attempted to remedy the situation by setting the story in England rather than Japan and rewriting some of the libretto, thereby eliminating the offensive stereotypes while keeping the charm and wit of the original piece.*

In the fictional town of Ti-Tea-Pu, the son of the King (or Mikado) is disguised as a traveling musician (a second trombone). Franki-Poo (the dashing Anthony Rohr) is looking for his love, Tum-Tum (Margaret Matejcek, with a strong pure voice). Sadly for the lovers, she is the ward and betrothed of the Grand High Executioner Co-Co (a very funny Tyus Beeson). Because of the complicated laws of the land (which include a mandatory punishment of beheading for the crime of flirting) and Franki-Poo's desire to die if he can't be with Tum-Tum, Co-Co grants them permission to marry for a month, after which time Franki-Poo will be executed and Tum-Tum can marry Co-Co as planned (do you follow?). This crazy plan is approved by Co-Co's right hand man Pooh-Bah (Alex Kolyszko, delighting in the multiple facets of this all-powerful man, from whom we get the term pooh-bah). The King/Mikado himself (a strong Doug Freeman) appears in the second act and plans must be changed. Co-Co woos Franki-Poo's previous betrothed Katy Shaw (the beautiful-voiced Lara Trujillo) so that Franki-Poo can confess his true identity, marry the woman he loves, and not be executed (still following?). Yes, it's a silly and convoluted story, but it's great fun.*

The over 30-person ensemble sounds divine singing these rhythmic and melodic tunes (no amplification or body mics needed). Director Rick Shiomi keeps the tone light and fun, and uses the space well, which could be a challenge with that large of a cast. As a former (?) band geek, I love the huge backstage orchestra that also sounds beautiful, under the baton of Randal A. Buikema. Penelope Freeh has created some fun choreography for some of the numbers, and costume designer Barb Portinga has dressed the large cast well, the men in the neutral colored casual chic gear appropriate for a game of cricket, the women in flouncy pastels.

If you're a fan of classic comic opera well and traditionally done, you must check out GSVLOC. Even better when the dated and offensive material is removed, allowing us to enjoy what's good about the original without perpetuating the stereotypes that were a product of the time, but no longer serve.


*Some text adapted from what I wrote about the 2013 Mu/Skylark production.