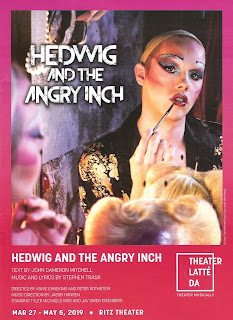 I've been excited to see Theater Latte Da's production of Hedwig and the Angry Inch, starring multi-talented #TCTheater artist Tyler Michaels King, since they announced their season last spring. I've loved Hedwig since seeing the movie in the early aughts, and even more so since seeing her Broadway debut five years ago in the person of Neil Patrick Harris. Even though punk rock isn't usually my scene, I really connect with this queen of the misfits and losers who encourages us all to be ourselves, and reminds us that we are worthy and whole exactly as we are. Latte Da's production captures all that and more - part fantastically fun rock concert, part transformational journey to the self. The piece is co-directed by Artistic Director Peter Rothstein and Annie Enneking, #TCTheater's preeminent fight choreographer and headliner of the rock band Annie and the Bang Bang. Through this perfect combination of Peter's clear vision for music-theater storytelling and Annie's rock star sensibilites, they have created a piece that's epic and intimate, loud and in your face, yet beautiful and touching.

For those unfamiliar with the show, Hedwig and the Angry Inch plays out as a 90-minute concert in which transgender East German rocker Hedwig tells us her story between singing her songs. Born a boy in East Berlin to a cold German mother and an American GI who abandoned them, Hedwig later falls in love with another American GI and has a botched sex change operation (hence the "angry inch") so that she can marry him and move to America. Shortly thereafter she finds herself divorced and broke. She falls in love with a young man, nurtures him and writes songs with him, whereupon he leaves her and becomes a famous rock star using her songs. This leaves Hedwig a bit angry with her lot in life, but through the course of this one evening she's able to work through it and come to a place where she's not angry anymore, she's able to be herself and let those around her be who they are (including her husband/back-up singer Yitzhak). It's a transformative experience for Hedwig and for those of us lucky enough to go on this journey with her.*

This small cast musical includes only two characters, plus the band, and is largely a one-person show. And that one person is Tyler Michaels King. He is so stinkin' talented, and this role allows him to use all of his many varied talents - comedy, drama, improv, physicality, music, and the ability to pretty much single-handedly captivate an audience for 90 minutes straight. He's so fully in it, so real and human, inhabiting all of Hedwig's messy and complicated corners. Jay Owen Eisenberg provides wonderful support as Yitzak, not only as Hedwig's wig and prop master, but also imbuing the character with seething resentment and undergoing a transformation of his own. Bewigged Music Director Jason Hansen leads the awesome four-piece onstage rock band on keyboard, all of them decked out in rock star gear and playing the roles as well as their instruments.

A fun feature of Hedwig is that because it's presented as a concert, we the audience are part of the show. We're Hedwig's audience and she plays to us directly and includes us in the performance. She fully acknowledges the here and now, including local references and jokes. Don't sit on the aisles or in the front row unless you want to be flirted with; they've built a catwalk coming off the stage which allows even easier access to the audience (which is where Tyler's improv skills come into play).

On stage is an actual life-sized pop-up camper from which Hedwig and the band emerge, the latter 15 or 20 minutes before showtime to begin the concert. The Ritz stage is laid bare to the back walls, with a beautifully grungy look. Strings of colored lights extend from the stage into the audience, and during one tender moment Hedwig is surrounded by the glowing light from bare bulbs plugged in by Yitzak. The "Origin of Love" scene is charmingly illustrated by transparencies on a projector (remember those?) displayed on a shower curtain pulled across the front of the stage. Hedwig looks fabulous in her signature trailer park trashy chic attire and endless array of wigs.**

Our language around and understanding of transgender people and gender fluidity has change greatly since John Cameron Mitchel created the character of Hedwig in the '90s. Twenty years later, Hedwig and the Angry Inch is still an important part of that conversation. At a time when transgender people are facing renewed discrimination and violence, Hedwig reminds us that everyone is a unique individual who is worthy of life and love, no matter what body parts they have or whom they choose to love. Hedwig give us all permission to dance to our own rock and roll, whatever that looks like, whatever that feels like, whatever that is.

The fabulous transformative music-theater-rock concert experience that is Hedwig and the Angry Inch continues through May 5 at the Ritz Theater in Northeast Minneapolis.