"Charlie and the Chocolate Factory" Broadway Tour at the Orpheum Theatre 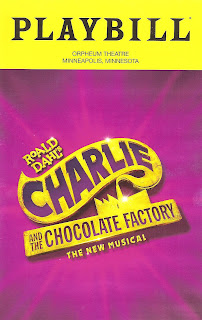 British author Roald Dahl's 1964 novel Charlie and the Chocolate Factory is one of our most beloved, magical, and somewhat twisted children's books. The 1971 film adaptation starring Gene Wilder is iconic (the 2005 Johnny Depp version less so). Perhaps due to the success of the musical adaptation of one of Roald Dahl's other beloved novels, Matilda (receiving its regional premiere at Children's Theatre Company this spring), Charlie was also adapted into a musical. It premiered on Broadway in 2017, where it ran for under a year and didn't make much of a splash, so I went to the Broadway tour last night with not very high expectations. Which is often the best way to see a show, and be pleasantly surprised at what is a charming and delightful musical. There were a lot of children in attendance (about whom I was a bit worried in some of the more gruesome moments of the show), and all seemed to be enjoying the magic and wonder of the story. In fact I'd love to see CTC produce this Roald Dahl story once it becomes available for regional productions (perhaps the more successful West End version). In the meantime, you have two weeks to visit the Chocolate Factory on Hennepin Avenue in Minneapolis (click here for more info, including student/educator rush tickets, and "Kids Night on Hennepin").

It's been many years since I've read or watched any version of this story, so I can't say exactly what has changed in this version. Perhaps that's part of why I enjoyed it; I don't have much of an attachment to the original. This version of the story is set in modern times and includes references to Instagram, YouTube, and smart phones, which I think works well and makes it more relatable for today's kids. The first act introduces us to Charlie living with his hard-working single mother and four bed-ridden grandparents. He befriends the proprietor of a candy shop, who turns out to be Willy Wonka in disguise. The Golden Ticket contest is revealed, and Charlie gets more and more disheartened as four winners (all spoiled, obnoxious children of over-indulgent parents) are revealed. But as we knew he would, Charlie finds his Golden Ticket, catapulting us into the Chocolate Factory in Act II. The other four obnoxious children meet their gruesome ends in the factory, and our Charlie is left as the winner of the contest, becoming the next Willy Wonka. In this story, nice boys win.

The Marc Shaiman/Scott Wittman score incorporates songs from the 1971 movie ("The Candy Man" and "Pure Imagination") and adds some decent if forgettable songs (I'm not rushing to download the music), including appropriate themes for the differently annoying kids. The choreography (by Joshua Bergasse) is fun and energetic, well performed by the ensemble. But by far the highlight is the Oompa Loompas, who are as adorably creepy as they should be. Small white bodies manipulated by ensemble members dressed in black, with just their faces crowned in orange curls showing. It's a marvelous effect (the only award the Broadway production was nominated for, and won, was a Drama Desk Award for best puppet design). This "world of pure imagination" relies heavily on video projection and animation, which is not my favorite thing in theater (I prefer more old-fashioned low-tech effects). But they do create some cool images to represent all of the fantastical things happening.

On the night I saw the show, understudy Benjamin Howes filled in as Willy Wonka (a role usually played by Noah Weisberg). He's wonderful, funny, and charming with a definite Gene Wilder vibe. Three children alternate in the role of Charlie; I saw Reuby Wood and he more than held his own as the only child in the cast full of talented professionals. He's the heart of the show. Other highlights in the cast include James Young as the darling Grandpa Joe, Matt Wood as poor sausage-loving Augustus Gloop (although I have to say, the fat jokes are a little hard to take), Jessica Cohen as the spoiled ballerina Veruca on point, Brynn Williams as the gum-popping purple velour tracksuit-wearing Violet, and Daniel Quadrinao in a very physical performance as Mike Teevee.

While maybe not the most brilliant musical adaptation, Charlie and the Chocolate Factory is fun and entertaining, clever and darkly funny at times, and well performed by the talented and diverse cast. See it at the Orpheum Theatre now through March 17.