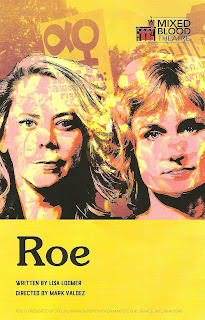 I'm not sure there is a more controversial or hotly debate Supreme Court decision than the 1973 case Roe v. Wade that confirmed that the constitutional right to privacy includes a woman's right to decide whether or not to end a pregnancy. Every American has heard of this case, and every American has an opinion about it, usually a very strong one. In Lisa Loomer's brilliant new play Roe, receiving just its second production at Mixed Blood Theatre ahead of a possible Broadway premiere, she explores the life of the two women behind the case: Norma McCorvey, the originally anonymous plaintiff, and Sarah Weddington, the lawyer who successfully argued the case in front of the Supreme Court. It's a fascinating story, not just the journey to the Supreme Court, but the continuing journey since. Or rather, two intersecting journeys for these two very different but equally determined women who parted ways somewhere along the line. But this is no dry history or legal lecture, or a preachy lesson. The play is smart, funny, dynamic, and moving, telling very human and relatable stories about very real and flawed characters. The cast and creative team bring it to life flawlessly, with all elements combining in a way that makes Roe the best thing I've seen this year. It closes at the end of the month, with many performances at or near sell-out; act fast so as not to miss this important and exciting new work (click here for more info and to reserve tickets).

I had the great privilege of reading this play (twice) and helping to lead a discussion about it at Mixed Blood Theatre in February. Confession: I don't read plays, I see plays. This was really my first experience reading and studying a play on the page, and then going to see it fully produced on a stage, which perhaps increased my appreciation of it. The writing is incredibly clever in the way it weaves together the very different perspectives of the various characters, often citing a book, Wikipedia, or even their obituary. It plays with the idea of truth - when, for example, Norma says she was two and a half months pregnant when she first met with Sarah, and Sarah says she was at least four months, which is true? And does it even matter at this point? The result is the same. We hear multiple sides of this story, with characters often breaking out of the scene to speak directly to the audience, or to argue with each other about what really happened. In the final scene, the audience becomes part of the action in a Town Hall discussion about abortion that becomes increasing heated and uncomfortable, until one young woman cuts through all of the angry rhetoric to remind us of what's really at stake. The playwright does a beautiful job of tackling this incredibly complicated and nuanced issue, and presenting it on stage in a very human, relatable, immediate way that hopefully goes beyond the usual debates that don't get anywhere.

The play begins in the early '70s, with young and inexperienced lawyers Sarah Weddington and Linda Coffee looking for a plaintiff to challenge Texas abortion laws, and young single gay pregnant Norma McCorvey looking for an abortion. But the story is not as simple and straight-forward as one might think. I had never heard the name Norma McCorvey before, much less knew that the woman who was Jane Roe eventually became a pro-life activist. There's a lot that happens in between as the play brings us right up to the present. Norma was used and abused by almost everyone in her life, causing her to abuse drugs and make some... interesting choices (she died just two years ago), and Sarah sacrificed everything to work for the cause (and continues to do so). In reality, the two women didn't have very much interaction with each other, but the playwright constructs a sort of dialogue between them, as they witness and comment on scenes they didn't actually take part in. But the play is called Roe, not Norma, or Sarah. The play is the story of the case, and the affect it's had (and continues to have) on all of us.

The complicated narrative is brought to life on stage in a dynamic and exciting way by director Mark Valdez, with scenes flowing from one to the next seamlessly. The terrific 11-person cast is anchored by two incredible performances by Tracey Maloney as Norma and Laura Zabel as Sarah. They both bring such humanity and depth to their characters that you can't help but empathize with them, even if you don't agree with what they're saying. Fresh off of playing another woman at the heart of an important legal decision (see Stewardess!), #TCTheater favorite Tracey Maloney is perhaps as good as I've ever seen her here as Norma. Tough-talking and funny, but also vulnerable and full of hurt as Norma is just looking for someone to truly see and love her (and can't accept it when someone does). I know Laura Zabel mostly from the comedy world, and she's a revelation here as Sarah, the complete opposite of Norma. She portrays Sarah's absolute strength and dedication to securing the rights of all women, but also her flaws and struggles. This play doesn't work without two equally strong actors in these two roles as they do this dance of history and truth, and this pairing works.

The other ensemble members all play multiple characters in multiple wigs and accents, and do so beautifully, sometimes changing clothes mid-scene on the side of the stage. Highlights include Bonni Allen as Norma's horrible mother and a deceptively sweet pro-life activist, Sam Bardwell as a couple of lawyers on both sides of the case, Michael Booth as the charming and creepy Flip Benham, Kate Guentzel as Linda Coffee and various other entertaining women, Dame-Jasmine Hughes as Norma's nurse friend et al, Patrick O'Brien as Minnesota-raised Justice Harry Blackmun, Lisa Suarez as Norma's supportive long-time and long-suffering girlfriend Connie, sweet young Olive Middleton as a child who gets to Norma, and Jamila Joiner in a late cameo that had the audience in tears.

Sarah Bahr's versatile costumes take us through the '70s, '80s, and beyond with some fun and character-defining fashions. The relatively simple but effective set (designed by Anna Robinson) is a blank canvas that can be a Texas pizza parlor or the Supreme Court, with locations and dates projected onto panels at the back of a stage. A cool feature of the play (that's written in the script) is that they use the actual recordings of the Justices speaking, coming from different parts of the room, that really brings home the reality and gravity of this story (sound design by C. Andrew Mayer).

Roe the play is smart, funny, and incredibly relevant at a time when Roe the Supreme Court decision still stands (as they say in the play), but safe, legal abortion is become less accessible to women, especially poor women and women of color. Not only is this a brilliantly constructed and executed piece of theater, but it couldn't come at a better time when people are more ready to hear it (did I mention it's already almost sold out?). I hope it gets to Broadway after this, where I hope I will see it again, but I can't imagine being any more affected than I was last night by this production. I'll say it again - best thing I've seen this year, no question.