"Sense and Sensiblity" at Lyric Arts 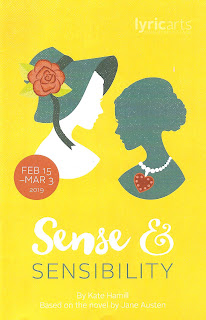 The new adaptation of Jane Austen's Sense and Sensibility, which premiered in 2014 and played at the Guthrie in 2016, has made its way to Lyric Arts' Main Street Stage. As I wrote in 2016, playwright and actor Kate Hamill has adapted the beloved novel "with theatricality, wit, and purpose" (she also adapted Little Women, which premiered at the Jungle last fall, and Pride and Prejudice, just announced as part of Park Square Theatre's 2019-2020 season). Now is a great time for these women's stories written by women to be adapted for today's audience by a young female playwright; audiences are hungry for it. Lyric's production is a delightful and charming version of this sisterhood story.

In case you get your Jane Austen novels confused like I sometimes do, S&S is the one with the three Dashwood sisters whose father died, leaving his estate to his son from his first marriage, which leaves them and their mother homeless. A kindly relation provides them a small cottage to live in, which is pleasant enough if less grand than they're used to (and they still have servants so they're not exactly poor). Eldest daughter Elinor (sense) has made a connection with her sister-in-law's brother Edward Ferrars, and is happy when he visits them at their new home, but distraught when she inadvertently finds out about his secret engagement to one Miss Steele. Second daughter Marianne (sensibility) falls for the dashing Mr. Willoughby and soon they're almost engaged. But not quite, because if there's one thing certain about Jane Austen, it's that the handsome charming man is actually a heel. There's a health crisis, and the sisters (including youngest Margaret) bond together for an eventual happy ending, if not the one they expected.

The show is well cast and directed by Natalie Novacek, new to Lyric but not to #TCTheater. Most of the 11 actors in the ensemble are double-cast to cover Austen's large universe of characters (and a chorus of "gossips" who help move the plot along while commenting on it), which is a smart choice because there are many characters who only appear for a scene or two. The actors do a great job of differentiating their characters not necessarily by look or wardrobe, but by attitude, voice, and other choices, so that it's clear who's who. Highlights in the cast include Alyson Enderle and Calli Kunz as our very different but equally lovable sisters; Gabriella Abbot with two delightful performances as the youngest sister and a very chatty Anne Steele; Vincent Hannam as the adorably awkward Mr. Ferrars (and his brother); Grant Hooyer as the not-so-generous elder brother and the devilishly charming Willoughby; Eric Knutson as the kind older (he's 35!) Colonol Brandon, with a few secrets of his own; and Lisa Vogel as the girls' mother, as well as the Ferrars brothers' mother.

The simple and elegant set (designed by Sarah Brandner) consists of a backdrop of draped white curtains (warmly lit by Jim Eischen) and a few period set pieces. These are moved between scenes by the ensemble (dressed in lovely period garb designed by Kathleen Martin), sometimes accompanied by music (pop songs in classical arrangements) and movement (directed by James Kunz). But sometimes scene transitions are done in silence, which slows down the storytelling. A more consistent use of music and movement throughout would keep the momentum going. They make great use of the entire theater space, with those long rambling walks through the countryside taking the actors up and down the aisles.

Kate Hamill's Sense and Sensibility is a fresh and modern adaptation of a classic, that still stays true to what we love about the original. Lyric Arts' entertaining production continues through March 3.