"Into the Woods" by Ten Thousand Things at North Garden Theater 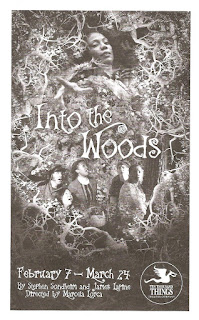 Into the Woods is one of Stephen Sondheim's most popular and frequently performed musicals. In the eight years I've been blogging about #TCTheater, I've now seen (and written about) seven different local productions. So I'm not going to write about the brilliance of this fairy tale mash-up (with book by James Lapine) that turns the idea of "happily ever after" on its head; you can read my thoughts about that here. Instead, I'll share with you what makes this production special, namely, because Ten Thousand Things does theater like no one else. It's my first time seeing them do Sondheim, which is exciting because TTT has a knack for breaking down the most complex shows (and Sondheim is nothing if not complex) and laying bare the truest heart of the piece. And since they're a weaver of fairy tales, traditional and otherwise, Into the Woods is a perfect match for TTT. This production (which continues through March 24 at various locations, including free performances at prisons, homeless shelters, community centers, and other places where people don't normally experience theater and therefore need it the most) is sheer perfection and perhaps my favorite thing they've done. But I say that about pretty much every TTT show I see.

A few thoughts/highlights about the show:

This cast is so delightful, they each deserve a mention:
Even though I've seen it many times, or maybe because I have, I thoroughly enjoyed Ten Thousand Things' unique take on Into the Woods. If you're a fan of Sondheim or fairy tales or brilliantly executed bare bones theater, go see this show. Paid public performances are at Open Book on Washington Avenue in Minneapolis and at North Garden Theater on 7th Street in St. Paul (free parking and less traffic). Make your reservations now.