"The Dolls of New Albion" streaming from Feral Theatre Company 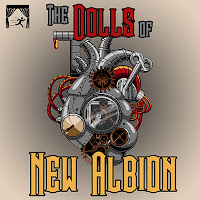 Intrepid young #TCTheater company Feral Theatre seems to have figured out this pandemic theater thing. Maybe because they've only been around since 2019, they were able to be more flexible and adaptable to the new world, since they had barely established themselves in the old world. In the last year, they've produced a series of podcast play readings, had several entries in the 2020 Virtual Minnesota Fringe Festival, and presented a live virtual production of The Awakening of Spring from various locations. Now they're bringing us the regional premiere The Dolls of New Albion, which seems to be somewhat of a cult hit musical, especially in the UK. In fact, this is only the third US production. It's a great piece; it reminds me of the kind of obscure musical gems that Theatre Elision and Minneapolis Musical Theatre often do. And it lends itself well to this time, in that although this production features a nine-person cast, most scenes only involve a few of them. They're able to practice social distancing on stage, wearing masks if there are multiple people on stage (even singing through masks), or removing their mask if they're alone on stage. Because that's right, this show is performed live, with all of the performers together, at Elision Playhouse. I can only hope/assume that they are following protocols backstage as well, but from this end, they appear to be doing everything right. That is: live theater almost as we remember it, with safety protocols in place for the performers, and with the audience tuning in from the safety of their own homes.The 80-minute musical is almost entirely sung-through, and I have to admit I didn't entirely follow the plot. Here's the summary from the press release: "Set in the fictional city of New Albion, The Dolls of New Albion focuses on four generations of the McAlistair family and their attempts to raise the dead by placing souls into mechanical 'dolls.' Originally used to help people connect back to their dear lost ones, the McAlistairs and all of New Albion discover that this connection is more hollow - and more dangerous - than anyone could have ever imagined."I really enjoyed the score, with its interesting and unexpected melodies (the 2012 London cast recording is available on Bandcamp if you want to give it a listen), and it's well performed here (with music direction by Kay Jay Olson). The cast sings to a recorded track, which in live theater is a big no-no in my book, but which isn't really noticeable when the sound is already being filtered through your TV or computer speakers. I'm not going to single out any performers, because I found it a little difficult to figure out who was who on my TV screen under masks and costumes. But there's really no need to single anyone out, because this cast (Myia Ann, Daniel Collette, Isabella Dunseith, Erin Gassner, Bradley Johnson, Jared Mogen, Shandi Mortenson, Abilene Olson, and Nora Sonneborn) is consistently strong. Everyone delivers fantastic vocals with great emotionality. I can only imagine what a thrill it would be to hear them live. It was odd when someone finished a particularly stirring number, only to be greeted by silence where there should have been thunderous applause.

The performance is basically a filmed stage performance, although they have a couple of cameras from different angles, but no close-ups or camera movement. This requires a bit of extra focus by the audience to cut out external distractions and pay attention, but it's worth the effort. The on-point steampunk costumes (designed by Kari Grundmeier), dramatic lighting (designed by Caden Riley), video projections, and shadow puppets all contribute to the feel of the show. The props, such as the titular dolls, are a little hard to see from the wide angle, but I'm sure they were cool in person.

This is far from the most satisfying way to see theater, and we all miss being in the same room to hear some powerhouse performers such as these. But Feral Theatre is continuing to be creative about making art and making it accessible in a safe way, and the show succeeds under these circumstances.

The Dolls of New Albion continues at specific performance times through February 18.