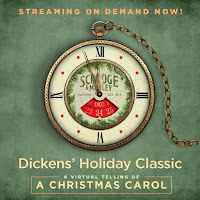 The Guthrie Theater has been presenting Charles Dickens' classic story A Christmas Carol for over 40 years. The show has gone through many iterations - different adaptations, different directors, different casts, different uses of music and dancing. 2020 sees yet another new version of the classic - a virtual one you can watch in your own home (for just $10 per household). Starting from an adaptation written by Dickens himself for the one-man-show he performed, Guthrie Artistic Director Joseph Haj teamed up with #TCTheater artist E.G. Baily, who also has a film company, to adapt and direct this piece, creating something entirely new. Not exactly theater, and not exactly film, the show combines bits of both media for an experience that is smaller, quieter, and more intimate than the Christmas Carol we're used to seeing on the Guthrie's thrust stage, but just as lovely, engaging, and moving as ever.

Dickens adapted his work in four staves, or stanzas (be sure to take a look at the digital program, which has tons of great dramaturgical information, as per usual). So the Guthrie enlisted four familiar faces from recent productions of A Christmas Carol to tell each section of the story. Charity Jones (a Scrooge alternate the last few years, the first woman to play the role at the Guthrie) begins the story in the familiar way, with Scrooge and his long-suffering clerk Bob Cratchit in the office, then takes us to Scrooge's home and his first visit from a spirit - the ghost of his deceased partner Jacob Marley. The storytelling torch is then passed to Ryan Colbert, as Scrooge is visited by the Ghost of Christmas Past and sees scenes of his younger self at school and working at Fezziwigs (a natural fit, since Ryan has played young Scrooge in recent years). Meghan Kreidler steps in as the Ghost of Christmas Present shows Scrooge the Cratchit family (Meghan having played Mrs. Cratchit previously) and his nephew celebrating Christmas. Finally, the main Scrooge for the past several years, Nathaniel Fuller, concludes the story with the Ghost of Christmas Future showing Scrooge the dismal days ahead if he doesn't change his ways, which of course he does in the most delightful and heart-warming way.
Each actor serves as the storyteller in turn, spending some time at the desk as if writing the story, and wandering through sets that hint at the setting. They go through motions of pouring a cup of tea, washing up, or stirring a pot as they tell the familiar story (if you've seen the show as many times as I have, over a dozen, you can almost recite certain words or phrases along with them). Employing subtly different vocal styles to voice the different characters in their portion of the story, each actor's performance is as clear and understandable as it is moving and poignant. Without all of the usual active bustle of the stage show, the audience can really focus on the text and the story.
Comfortingly reminiscent of past stage productions, the characters are dressed in costumes from the show (designed by Amy Schmidt), donning and removing hats and coats, and smoke and lighting effects (designed by Tom May) are employed to enhance the storytelling. But this is not just a filmed stage performance; the camera is on stage with the actor (they filmed on the proscenium stage), moving in and around the set pieces pulled from past versions of the show (designed by Walt Spangler). As opposed to watching the story at a distance from your seat in the audience, it feels like you're right there in the room with Scrooge as he goes on this life-changing journey through time, making it almost more impactful than the full show. We get to go upstairs to Scrooge's loft bedroom, and into the Cratchit's homey abode. It's almost like going inside A Christmas Carol for a private little tour.
I've been lucky enough to be a Guthrie subscriber for 17 years, and rarely has a year gone by in which I haven't seen A Christmas Carol. I'm grateful not only that the tradition continues, but that we're able to experience both Dickens' classic and the Guthrie's classic in a new and enlightening way. There's a reason this story has remained so popular for over 170 years. As I wrote a few years ago: "I never tire of seeing it, because Charles Dickens' story of redemption, community, family, and human kindness never gets old. It's a beautiful and necessary thing to be reminded that 'what brings us together is greater than what drives us apart.' That it's never too late to change, to grow, to become a kinder and more generous person. This timeless story of generosity, gratitude, compassion, and kindness is something we need to cling to, perhaps now more than ever."
Whether you've seen the stage show a dozen times, or never, I encourage you to check out this 46th annual adaptation of A Christmas Carol from the Guthrie. It's beautifully adapted to the virtual format, the only "theater" available to us at the moment, in a way that truly brings out the heart of this beloved classic story.
*Click here to read about all of the virtual holiday shows I've seen.