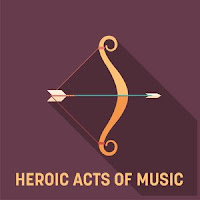 The third installment of Theater Latte Da's fantastic virtual cabaret series called "The Ghostlight Series" is now available! The five-part series began with the powerful and moving Twelve Blocks From Where I Live, Regina Marie Williams's response to the murder of George Floyd in photos and song. Next was Re-Cast, which gave some of our favorites the chance to sing a song from a role they would never be cast in. And now we have Heroic Acts of Music, honoring 20th Century musicians (and others) who used music for protest or support in difficult and dangerous times. All three shows are available to watch now and as many times as you want through August with the purchase of a season pass. These gorgeously filmed and edited 30-minute shows with fantastic performances from some of #TCTheater's best are worth every penny, helping to bridge the gap until we can gather in person again to share stories and music (hopefully very soon!).

This one surprised me. I thought it would be musical theater protest songs, but it's not that. Curated and directed by Artistic Director Peter Rothstein, the show honors five very different people or groups in the 20th Century who used music in their heroism: Wallace Hartley, the bandleader of the doomed Titanic who continued to play and give comfort to the passengers as the ship sank; Marian Anderson, the Black opera singer who sang on the steps of the Lincoln Memorial to an integrated crowd in 1939 when theaters were still segregated; Vedran Smailović, a cellist who played amongst rubble and sniper fire in 1992 Sarajevo; the Swingjugend (swing kids), a group of young people who turned their love of American swing and jazz into protest in Nazi Germany; and Joan Baez, the American folk singer who toured South America amidst death threats. All of them are inspiring stories, told by the performers with accompanying historical photos, before launching into a song or two.

And the music is just fantastic. The highlight for me is an original song written and performed by Cat Brindisi and David Darrow called "On the White Star Line," about the sinking of the Titanic and the life of "Wally," a fun and rockin' tune despite the dark subject. Also great are Greta Oglesby singing to honor Marian Anderson, accompanied by Sanford Moore; Dan Piering and Jon-Michael Reese dueting (on cello and piano, respectively) and singing John McCuthcheon's “'Streets of Sarajevo;" Rush Benson and Renee Guittar dancing as the "swing kids;" and Jennifer Grimm singing the songs of Joan Baez, accompanied by Joe Cruz and Francesca Dawis. Filmed primarily on the stage of the Ritz Theater in Northeast Minneapolis, this is an inspiring collection of music and stories, shedding light on various acts of heroism and how music can be vital part of that.

Visit Theater Latte Da's website to watch the first three shows in the Ghostlight Series now, with the remaining two shows to be released this summer.