"A Pickle" by Minnesota Jewish Theatre Company at Harriet Island 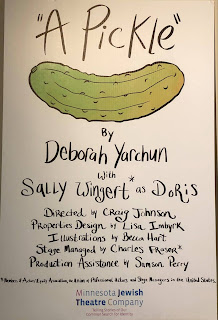 Nine months ago, Minnesota Jewish Theatre Company began their "Theater Six Feet Apart" season with an outdoor production of 25 Questions for a Jewish Mother, which was the only live in-person play I saw between February 2020 and May 2021. After several great virtual shows, they're back outside* to close out this unique season with A Pickle. This solo show premiered at the Minnesota Fringe Festival a few years ago and tells the true story of Doris Rubenstein, who petitioned the Minnesota State Fair to add a category for Kosher salt brine pickles. It's a funny and engaging play and a perfect choice for safe outdoor theater. In fact it's so popular that their entire run is already sold out! But you can express your interest at their website, so maybe we'll see it again sometime.

Knowing she had an interesting story to tell, Doris approached The Playwrights' Center and worked with affiliated writer Deborah Yarchun. Deborah wrote Doris' story as an engaging one-woman show with direct address to the audience, bouncing back and forth between "the pickle story" and other significant moments in Doris' life. She describes herself as possessing a series of jars that hold the important things in her life - baking, her upbringing, social justice, and of course, pickles. When Doris entered her pickles in the "other" category at the State Fair, the judges disqualified them because they didn't understand the traditional Kosher salt brine pickles, because they're different than the pickles they usually see. Which is when pickles become a symbol for a whole lot more, and Doris becomes a bit of a local hero.**

I attended the show at the Target Stage at Harriet Island (the same place I saw 25 Questions last summer) on a chilly and drizzly afternoon that felt more like mid-March than late May. But that didn't stop Sally Wingert, or the sold out audience. Sally really makes Doris come alive and feel like a real person. You know how people say "I'd watch them read the phone book?" Well, I'd happily watch Sally Wingert eat a pickle, and I did. She's on a bare stage with just a couple of jars (and pickles) as props, but she manages to make it feel like a warm and full experience. The show is well-paced under director Craig Johnson, with a light and funny tone but not without some more serious moments. When Sally took her bow at the end she commended us for being a great Minnesota audience - watching theater outdoors in the cold. What's more Minnesotan than that?!

The outcome of Doris' quest (no spoilers here) matters less than the fact that she spoke up for herself and her heritage, and opened some eyes at the State Fair to the fact that Minnesotans are more diverse than their categories allowed for. It's an inspirational story to be yourself, honor your traditions, cook your own food, and be proud of it.

Sold out performances of The Pickle continue at parks and private homes around the Cities through June 20. Follow Minnesota Jewish Theatre Company for more opportunities.

*For a full list of outdoor performances in 2021, click here.
**Some text borrowed from my review of the premiere production at the Minnesota Fringe Festival.