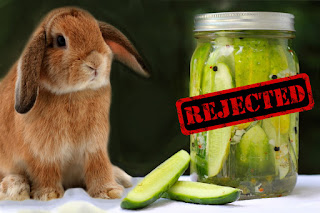 Summary: The true story of a woman who petitions the Minnesota State Fair to add a category for Kosher salt brine pickles.

Highlights: Sometimes a pickle is more than just a pickle. Sometimes it's a symbol of one's cultural heritage, a symbol of inclusion. Such is the true story of Doris Rubenstein's pickles. In a nearly perfect hour of theater, playwright Deborah Yarchun has written the story as an engaging one-woman show with direct address to the audience, bouncing back and forth between "the pickle story" and other significant moments in Doris' life. She describes herself as possessing a series of jars that hold the important things in her life - baking, her upbringing, social justice, and of course, pickles. When Doris entered her pickles in the "other" category at the State Fair, the judges disqualified them because they didn't understand the traditional Kosher salt brine pickles, because they're different than the pickles they usually see. Which is when pickles become a symbol for a whole lot more, and Doris becomes a bit of a local hero. This is a great story, well written, and personified brilliantly by Angela Timberman, so personable and funny and real. It's no wonder this show sold out all (or nearly all) of its performances and won the encore slot.

"It's chutzpah that puts the cherry on the spoon."