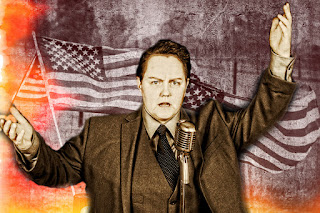 Summary: An adaptation of Sinclair Lewis' 1935 novel about populist president Buzz Windrip who turns American into a dictatorship after being elected.

Highlights: If you didn't know this was a novel about the rise of fascism in the '30s, you would swear it was written today. The ideals on both sides are eerily similar to what we hear in today's rhetoric. Highlights in the large cast (all of whom donated their time, with proceeds being donated to the ACLU) include Charles Numrich as the journalist who fights the good fight, Kit Bix (who also wrote this adaptation) as his colleague, and Meagan Kedrowski as the charming yet sinister dictator. To be honest, as a morning person I had a difficult time processing all of this at 10 pm, so make sure you're well-rested and alert before you try to tackle this heavy piece. Note that the Ritz studio is a small space, and it was nearly full at 10 pm on the first day of the Fringe, so watch the website for sell-out risk.