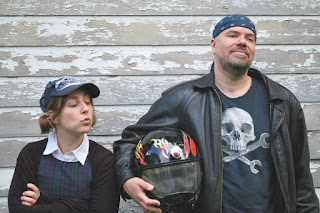 Created by: Eric Marinus and the ensemble

Summary: An original story about an Evel Knievel-like daredevil who returns home to the trailer park where he grew up.

Highlights: I love the narration and musical soundtrack provided by Tiny Gene Poole on steel guitar, it makes everything more melancholy and tragic. For this is a tragic story, despite the ironic title. Johnny Meteor (Trevor Keeth) has had some success in the daredevil jumping-over-things-on-a-motorcycle world, but after one too many crashes and burns, and the death of his mother, he decides to spend some time in the trailer park. He runs into old friend Ruth (Lauren Diesch) and her daughter Grace (Megan Rene Guidry), who wants to leave her books behind and enter the world of jumping, against her mother's wishes. Despite the plot twist obvious to anyone who's ever seen a soap opera and an inevitable conclusion, the show is worthwhile because of the winning and natural performances by the cast (particularly Lauren Diesch's impressive dual roles) and that plaintive steel guitar.