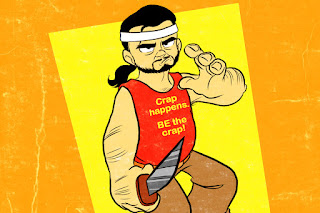 By: The Theatre Cosmic

Summary: The creator of a series of videos and books about self-defense, Ted "Critter" Montana, is put on trial for inciting violence among his fans and followers.

Highlights: This wacky and funny show switches back and forth between the Critter videos, in which he instructs on the six rules of a proper knife fight, and the trial. The assistant district attorney (played by a rotating series of guest actors, Michael Terrell Brown the night I saw the show) questions Critter about his videos, life, and philosophy. Which in the end seems to be commenting on the "stand your ground" law. But the video excerpts are the highlight of the show; this is my first time seeing a J. Merrill Motz show and he's very consistent and detailed in his portrayal of the crazy ball of energy that is Critter. I particularly enjoyed the long lists of various knife grips or stances, and his repetitive redundancy (which elicited such laughter from the crowd that the show used up every last second of the 60 minutes of allotted time).