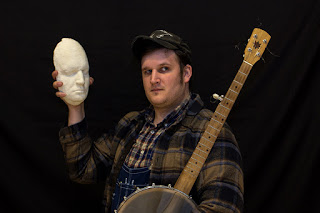 Title: There Ain't No More

Summary: "A one-man folk operetta" in which Willi Carlisle tells a story of folk songs by singing folk songs.

Highlights: As I left the Crane Theater at 11 pm last night after snagging the very last token to There Ain't No More I thought to myself, "I don't know what the hell that was, but it was somethin' all right. It sure was somethin'!" Willi Carlisle (who's been gathering acclaim for his show at Fringe Festivals across the country) gives a tour de force performance. He starts the show as an old man dying of heart failure, telling the story of his life. He's so believable that I was shocked at how young he was when he removed the mask. I'm at a loss for words to describe this show; it's a crazy brilliant ride across decades and countries, accompanied by folk songs which Willi sings and plays on five different instruments (guitar, banjo, fiddle, harmonica, and some sort of small accordion), and scenes displayed on a scroll that Willi turns himself. Even though I wasn't quite sure when he was the old man (who talks about a girl he loved and lost, and his time serving and playing for the troops in Vietnam), or when he was a narrator, or when he was a song collector, I was happy to go on the ride wherever he led me. A mix of history, folk music (my favorite genre), commentary on war, death, life, love... this show is unlike anything else you'll get at the Fringe and definitely something to see.