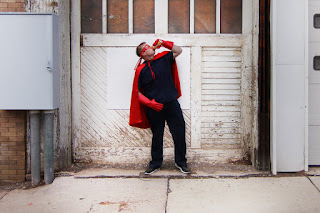 Summary: A small town donut factory and its employees are forever changed when an evil woman buys it and fires them, and then a comet passes overhead, giving everyone sort of special powers.

Highlights: It's super fun to see my favorite Duluth theater peeps in Minneapolis in this super fun show! It's pretty standard fringe fare, but performed with flair by the terrific cast. Shortly after our gang (Andy Frye, Angie Martin, Carolyn Trapskin, Katy Helbacka, Zachary Stofer) is laid off from the donut factory, a comet passes over giving them all superpowers that are less than super, like levitating small objects, or seeing two seconds into the future, or making people sing and dance (which is actually a pretty awesome superpower). At the same time, the new owner of the factory (a gleefully maniacal Mary Fox) also gains a superpower, and for some reason decides to sprinkle ecstasy into the donut batter, making the town go crazy. The subpar heroes plot and plan to pool their limited resources to overthrow her, but can't quite make it happen. Still, they can sing about it (with delightfully fun original music by Andy Frye). Next time you're in Duluth visit Renegade Theater (they're doing the rarely produced Pasek and Paul musical Dogfight right now!), and listen to the Take It With You (live radio theater from Duluth!) to hear more silliness and music like this.