Fringe Festival: "Hello, I Must Be Going..." 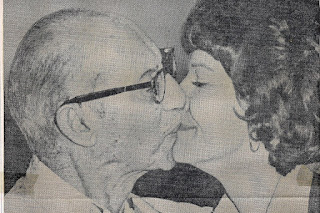 Summary: The true life story of Groucho Marx and the controversy around his late in life companion/secretary/manager Erin Fleming.

Highlights: When looking around for shows to fill the hole in my schedule last night, I saw "Ari Hoptman as Groucho Marx" and needed to look no further. Ari is impeccable as Groucho, portraying both his wry humor and his failing health in this fascinating story. He even does a bit of charming improv chatting with the crowd. Playwright Garrett Rademacher has constructed the play as a flashback of an older Erin (Deborah Frethem), who ended up homeless and (spoiler alert) shot herself in 2003, 26 years after Groucho's death. She expresses regret and nostalgia about her time with Groucho in the '70s, and then we see their relationship play out briefly. The younger Erin (Colleen Thul, who really looks like a younger version of Deborah) starts out helping Groucho with his life and career, including bringing about an honorary Oscar, but ends up verbally and physically abusing him. I would love to see this play expanded and fleshed out, with more time spent on how the relationship went from good to bad. But even as is, it's a fascinating look at an intriguing real life relationship. But you really don't need to know any more than "Ari Hoptman as Groucho Marx."