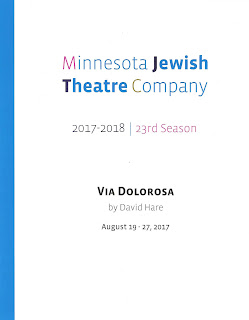 In 1997, British playwright David Hare (whose work was recently seen in the Twin Cities via Park Square Theatre's production of Amy's View) traveled to Israel and Palestine to do research for a play about British involvement in the area. What he came away with was a one-man play in which he, the playwright, tells stories from his journey there. Minnesota Jewish Theatre Company is presenting Via Dolorosa to begin their 23rd season, and wow, is it fascinating. I realized just how little I know about the subject, and felt like I should have been taking notes for this engaging lecture. Vaguely familiar phrases like Six-Day War and Oslo Peace Accord sent me scurrying to Wikipedia this morning for details, but it would take weeks, months, years of study to understand all the complexities and centuries of history. This play doesn't attempt to spell everything out, but rather give one man's impression of the land he experienced and the people he met.

On his journey, Hare talked to people on both sides of the conflict, people with vastly different opinions even within one side. People who were young and old, famous and not. He seems to truly like most of the people he met with and presents their stories without judgement. As the original director of the play said, rather than taking a side, what Via Dolorosa speaks out against is extremism. There's a great sense of sadness in the piece, as there doesn't seem to be any end to the conflict in sight. Even now, 20 years later, it continues.

Although the playwright did perform his own work originally in London, subsequent productions, of course, have cast an actor (despite one of the first lines of the play being "I am not an actor"). I can think of no better #TCTheater actor to perform this role than the great Robert Dorfman (with an excellent TC directing debut by actor Raye Birk). Robert is so natural that you almost forget that he isn't the person who lived this experience. With that trademark twinkle in his eye, he brings the audience right into his story with warmth and humor, making it all the more powerful when the twinkle goes out and the story turns dark. The house lights are up for most of the show, so it does feel like an intimate conversation as Robert looks directly at the audience and even responds to audience reaction. It's such a pleasure to go on this at times difficult and complicated journey with him.

The show is performed on a mostly bare and empty stage, against a backdrop of many, many boxes, a few of which he unpacks as he tells his story, perhaps representing the mountains of history, writings, and opinions about Israel and Palestine (scenic design by Michael Hoover).

The world is so big, and so old, and so filled with people and their stories. I don't know if I'll ever have the chance to visit Israel, but I'm glad I got the opportunity to experience it, even a little, through theater (as I do so many things). Only four performances remain in the limited run of Via Dolorosa, so act fast to see this compelling, thought-provoking, moving play.