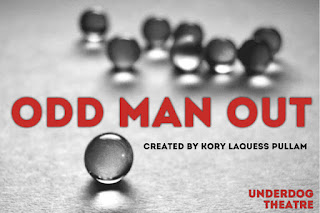 Summary: An intense drama about an African American family in Texas dealing with grief, infidelity, drugs, and coming out.

Highlights: If you're looking for a powerful and affecting drama at the Fringe this year - ODD MAN OUT is it. The Twin Cities Theater Bloggers chose Kory LaQuess Pullam as our favorite new artist last year, and he continues to remind us why and reaffirm our choice. As playwright and director, he's constructed a compelling story with complex characters that unfolds in under an hour, with an ending that left me wishing for an Act II to continue to explore this family and their issues as they relate to issues in society at large. Our main character is gay college freshman James (Malick Ceesay), whose complicated relationship with his father (LaMont Ridgell) is revealed in a couple of flashbacks. The main action takes place around the funeral of James' grandfather, and everyone in the family is dealing with something. James' uncle Charlie (Kennie Cotton) is avoiding child support and sleeping on his brother's couch. James' father cheats on his mother (Charla Marie Bailey), and his sister (Am'Ber Montgomery) sells drugs and isn't ashamed of it. And grandma (CiCi Cooper) is just trying to hold it all together. Add in James bringing his boyfriend home to meet the family for the first time and you have a situation ripe with conflict. And conflict there is. This excellent cast of actors mostly unknown to me all give powerful performances that brought me right into the story and made it feel almost painfully real.