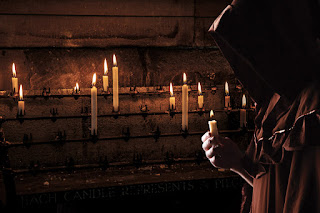 Highlights: I love history, and the history of religions is particularly fascinating (and sometimes scary) to me. I don't think I've ever heard of Pope Joan (or John) so this show was enlightening. Playwright Christy Marie Kent has the characters speak in modern language, making the story feel current. We follow John (Kjer Whiting) as he decides to dress as a man, not just because he wants to be a monk* but because that's who he authentically is. His secret is discovered by fellow monk Einhart (Jen Arzayus), who becomes a friend and confident as John rises through the ranks because of his dedication and scholarliness. When a rival to the papacy finds out, however, he is not so understanding, leading to what eventually is Pope John's downfall. This is a fascinating, thought-provoking show that explores history, gender identity, and the role of women in the Church (including the removal of the feminine divine from Christianity, Sophia the goddess of Wisdom).


*Kind of like that episode of Northern Exposure where Chris lives in a monastery and finds himself attracted to a silent monk, who turns out to be a woman. Except not like that at all.