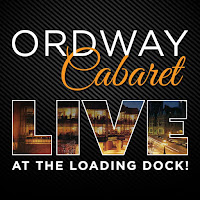 The Ordway's cabaret at the loading dock is back! Last year they discovered that behind the large elegant Center for the Performing Arts that houses two grand theaters in downtown St. Paul, there's a pretty great outdoor* performance space. There's a natural stage where the big shows load in their sets, with an overhead balcony stage as well, generous room for seating in the parking lot, a sort of amphitheater effect with the surrounding buildings, the blue sky for a ceiling, and soaring pigeons for ambience. On a lovely summer evening it's pretty perfect. This installment of Ordway Cabaret is a wonderful sampler of their recently announced season of touring shows (click here for details about Fiddler on the Roof, Summer: The Donna Summer Musical, An Officer and a Gentleman, and Waitress**), as well as as some hints of shows that are in the works for future seasons. And unlike last summer, there's a very good chance that we will be back inside the Ordway this season to watch full productions of these amazing shows. #getthevaccine

Half of the cast from last year's Cabaret at the Loading Dock returns (Ruthanne Heyward and the Ordway's newest resident artist Reese Britts) along with familiar Ordway faces China Brickey and resident artist Tyler Michaels King. They sing solos, duets, and group numbers (accompanied by Music Director Sanford Moore) from each of the shows in the 2021-2022 season, as well as a few teasers from shows in the works (as Artistic Director Rod Kaats said, they have shows like planes hovering in the air just waiting to land). These shows include the new movie adaptation Ever After (originally scheduled for 2019 but bumped for the pre-Broadway production of the smash hit SIX), the new original musical (a rare and beautiful thing) Triangle (an in-the-works co-production with Park Square Theatre about the Triangle Factory Fire), Beauty and the Beast (the 2020 holiday show that wasn't) and, surprisingly, one of my faves that I didn't know they were working on - Little Shop of Horrors!

They did not perform any songs from RENT, which they were hoping to do this summer, directed by Martha Banta who was an assistant direction on the original Broadway production, but I've heard that it will be coming in the 2022-2023 season. My favorite thing about the Ordway is that in addition to bringing in big Broadway tours, they also produce local productions featuring local talent that are just as incredible as the touring productions, so I look forward to seeing some Ordway Originals added to the schedule in the coming months and seasons as our world (hopefully) returns to normal.

The four performers (along with special guests Thomasina Petrus and Lois Sacco - there are different guests every night) are all wonderfully talented and seem as happy to be performing in front of a live audience again as the audience is to watch them. This is a show filled with so much hope for the future of the Ordway and the great things they can do, and really reminds us of the importance of performing arts in our community.