"Live at the Loading Dock: Ordway Cabaret" outdoors behind the Ordway Center 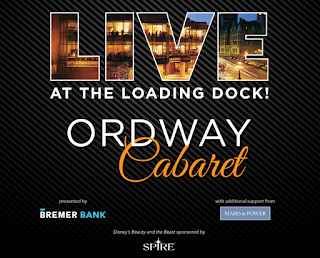 St. Paul's Ordway Center for the Performing Arts had planned a 2020-2021 Broadway season that included touring shows and original productions, classics and new musicals. But as this extended intermission is lasting longer than any of us had hoped, due to a pandemic that isn't slowing down, at least in this country, their plans have changed. The only show on the schedule as of now is a summer 2021 Ordway Original production of RENT, which of course is still dependent on what happens with the virus between now and then. To celebrate this season-that-wasn't, and to show their commitment to producing these shows at some future date, the Ordway is presenting an outdoor cabaret concert consisting of songs from the planned upcoming season, as well as one cancelled show from last season. Live at the Loading Dock is performed outside behind the theater in the loading dock area, which is really a perfect outdoor venue. Seeing this show nourished my theater-starved soul and gave me hope for that day in the future when we can all gather together safely to share music and stories again. 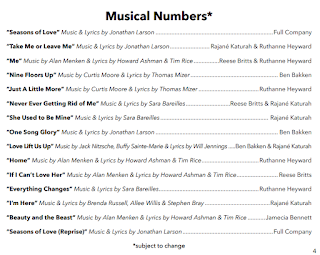 Any show that begins and ends with "Season of Love" is one after this RENThead's heart. The super talented company (Ben Bakken, Ruthanne Heyward, Reese Britts, and Rajané Katurah) came out an upper door at the back of the theater onto a balcony and sang RENT's anthem of hope, then joined music director and piano accompanist Sanford Moore on the lower level (I'm guessing that this is where the massive sets of touring shows are unloaded, but it also makes a perfect stage). In between the opener/closer, they performed a few more songs from RENT (see songlist), along with selections from Beauty and the Beast (originally scheduled for this December), The Color Purple (this spring's cancelled tour), touring shows Waitress and An Officer and a Gentleman (a new jukebox musical adaptation of the movie that's still in development), and the new musical Triangle by up-and-coming musical theater team Mizer and Moore, which will be produced in partnership with Park Square Theatre.
If you've read this blog before you probably know that the new original musical is my favorite thing in the world, so I'm particularly excited to see the latter show Triangle someday; the two songs performed at the show are fantastic, and the premise sounds fascinating (two love stories a century apart involving the Triangle Factory Fire). Other highlights include Ben with a soul-searing rendition of "One Song Glory" from RENT, Rajané bringing tears to my eyes with a gorgeous "I'm Here" from The Color Purple, Ruthanne reprising her role as Belle (in 2016 at the Chan) with a couple of numbers, and Reese's ridiculous Gaston and charming "Never Getting Rid of Me" from Waitress (which I know people complain about as a stalkery song, but so are most pop songs; it's no worse than "every breath you take, every move you make, I'll be watching you.")
But perhaps more important than showcasing these cancelled or postponed or upcoming musicals, this cabaret brings people together in the same space to listen to some live music (safely!), and gives performers a chance to do what they do best - share their talent and heart. It's not surprising that having live performances taken away from me makes me appreciate what it really means to me. It's more than just entertainment, it's about connection, sharing stories, and creating empathy for our fellow humans (as Ben spoke about during the show). Over the past few years, the Ordway Cabaret series has allowed performers to share their stories in new ways, and this is a very special pandemic episode.
There's one performance of this show left on Saturday, so get your tickets before they're gone! Also note the online programming that the Ordway has lined up for this fall (see it all here), including a discussion this Wednesday with RENT's original assistant director Martha Banta, who will be directing the upcoming Ordway production, and original cast-members Adam Pascal and Anthony Rapp (who performed a wonderful concert at the Ordway two years ago).
Last but most definitely not least - Ordway Resident Artist, the legendary Jamecia Bennett, made some time in her busy schedule to grace us with the most uniquely fantastic rendition of the title song from Beauty and the Beast that I've ever heard, arriving in a style befitting Ms. Bennett. If there were a roof on this space, she would have brought it down.