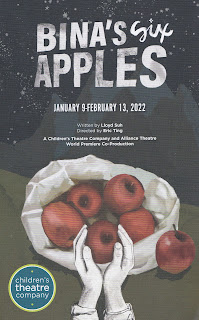 The world premiere new play Bina's Six Apples, which just opened at Children's Theatre Company, teaches children about the refugee and displaced person crisis that's happening now in many places around the world, and has happened countless times throughout history. This particular story is about a family forced to leave their home during the Korean War, inspired by playwright Lloyd Suh's own family history. There's no better way than theater to engender empathy with people who live in another time and place, and this play does just that through the sweet and inspiring story of one frightened but brave little girl.

It's 1950 South Korea, and the war is approaching, so Bina's family decides to move south, further away from the violence. Bina doesn't want to leave her pleasant home on an apple orchard and walk 70 miles into an uncertain life, but she feels safe with her family and begins to see it as an adventure. Bina can only carry a small bag of apples, even though she wants to do more, and insists on taking six apples, one for each member of her family - her brother and sister, mom and dad, and grandma. Just a few hours into the journey, a bomb goes off nearby and Bina is separated from her family. She's terrified, but she believes if she can just make it to their destination, the city of Buson on the Southeast coast, she will be reunited with her family. In a classic hero's journey, Bina meets both friends and foes along the way, learning important lessons that help her survive, and despite her fear and uncertainty, she bravely perseveres until she is reunited with her family.

Local young actor Olivia Lampert plays Bina and is onstage for virtually the whole 75-minute show, sometimes alone, delivering her lines to an apple. She beautifully conveys all of the emotions of this young girl, and brings the audience along on Bina's journey. She's joined by one other local child (Jayden Ham as a boy Bina meets on her journey), and five adult actors playing multiple parts. Because this is a co-production with Alliance Theatre in Atlanta, most of the adult cast is not local, except for #TCTheater favorite Sun Mee Chomet as Bina's mom and a wily merchant she trades with. Albert Park is Bina's kind father as well as an eccentric owner of a boat who gives Bina a ride, for a price; Elizabeth Pan plays Bina's wise grandmother; Joseph Pendergrast is both her brother and a deserting soldier looking for his little sister; and Shelli Delgado plays Bina's sister and another woman on the road.The storytelling has a fairy tale-like quality, with movement and music filling the spaces between
scenes. The set is dominated by a simple gray wall with water color outlines of mountains. Doors open up to let in large set pieces like a treehouse in an apple tree, or carts that represent a boat, mountains, or a merchant's goods. The river is represented with light and color in a trapdoor in the floor. Members of the ensemble, dressed in period costumes authentic to the time and place, manipulate all of the above, almost like living set pieces, sometimes exchanging a glance or a wink with Bina to keep it playful. It's all very flowy and dreamlike. (Direction by Eric Ting, scenic and lighting design by Jiyoun Chang, costume design by Junghyun Georgia Lee, composition and sound design by Fabian Obispo, movement direction by Marcela Lorca)One of my favorite ideas in theater is that the more specific something is, the more universal it is. Bina's Six Apples is a very specific story about a family in Korea in the 1950s, authentically told by the cast and creative team. Children may or may not see themselves in the specific details of the story, but the love (and playful teasing) within the family, the yearning for a safe home, Bina's fear in an uncertain situation, her joy at being reunited with her family, those are universal truths that connect us to Bina's story.

Bina's Six Apples continues through February 13. Children's Theatre recommends the play for children 9 and up - visit their website for more information and to purchase tickets.