"La Bohème" by Theater Latte Da at the Ritz Theater 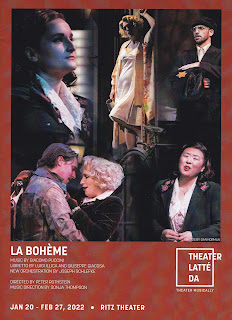 Theater Latte Da's re-imagined production of the 19th Century Italian opera La Bohème, first produced in 2005, and again in 2007, was scheduled to open on March 14, 2020. They had a few previews, and then... well, we know how that story goes. But now, 22 months later, La Bohème finally had its opening night at the Ritz Theater! It's a gorgeous, thoughtful production, accessible even to those not very familiar with opera, such as myself. But of course, my interest in La Bohème is primarily as the inspiration for my favorite musical RENT. I've seen La Bohème once before pre-blog, 20 years ago, which means I remember nothing about it. Watching this performance, I was continually delighted by how familiar the characters, stories, and even specific scenes are after seeing RENT 16 times in the last 25 years. But enough about RENT, that's just this RENThead's way into this piece. La Bohème is worthy on its own without that connection, being "one of the most frequently performed operas worldwide." I'd not rather see anyone's production other than Theater Latte Da, who has, as per usual, brought a new and unique spin to the piece while honoring the spirit of the original, and made this 125-year old opera feel vital and relevant.

Director Peter Rothstein has set the piece in Nazi-occupied Paris in the early 1940s, with just a few subtle touches to hint at the evil cloud hanging over the city, added to our artist characters' struggle with love, loss, disease, poverty, and yes, paying rent, that fuels the story. Rodolfo meets Mimi, and they embark on a sweet but troubled love affair, complicated by her declining health. Marcello reunites with his ex Musetta, but that doesn't run smoothly either. Despite the troubles and terrors of the day (Colline wears a yellow star on his coat, soldiers with swastika armbands roam the streets), they, together with friends Colline and Schaunard, celebrate life, art, and the Bohemian way.

Several of the lead roles are double-cast, I think due to the physically and vocally intense roles and schedule, but it works out well in this time of increasing COVID rates and constant testing. Hopefully this will help them keep the show safely going through its six week run, especially as things hopefully start to improve towards the end of it. And it also allows for more of this incredible (mostly) local talent to be showcased. Everyone in the 13-person cast that I saw sings gorgeously, and with such emotion, which really helps to connect to the lyrics, sung in Italian with English surtitles displayed above the stage. Benjamin Dutcher and Siena Forest as Rodolfo and Mimi are the heart of the piece with their touching love story, while Tony Potts and Katherine Henly provide the spice and the spark in Marcello and Musetta's tumultuous relationship. Rodolfo Nieto and Justin Anthony Spenner provide great support as Colline and Schaunard, and Bradley Greenwald steals scenes in the most charming way in a couple of roles.The versatile set allows for a couple of different locations, with some pretty creative use of scrims that alternately close off the space behind, or reveal it to show another part of the scene. The first and last act take place in Rodolfo and Marcello's shabby chic apartment, with one of Marcello's paintings in progress on the back wall, Rodolfo at a small table with a typewriter, and a mini model of Paris on the table. The back wall scrim opens up for the street market scene, and later outside Marcello and Musetta's place. The band is onstage off to the right, and at times we see into the room behind them. Chandeliers, sconces, and candles provide the mood lighting. The '40s period costumes are luscious, mostly subdued due to wartime, but with flashes of color or character, like Schaunard's bright-colored suit, and everything Musetta wears, including a to-die-for burgundy velvet pantsuit with matching gloves. (Scenic design by Michael Hoover, lighting design by Grant E. Merges, costume design by Rich Hamson.)

This production uses new orchestration by Joseph Schlefke, created for Theater Latte Da's original 2005 production. The full orchestra has been reduced to a five-piece band: piano, guitar, woodwinds, violin, and accordion, the intention being to better represent the music that our characters would've been hearing in 1940s Paris cafes. With music direction by Sonja Thompson (on piano), the sound is gorgeous and absolutely nothing is missing. I don't know if the performers are miked or not, but if I couldn't tell, that's a good thing because everything sounds natural and as it should. At times characters can be heard singing from backstage or offstage behind the audience, the sound appropriately muffled but still clear where it's coming from (sound supervisor Nicholas Tranby).

Two years is a long time to wait for an opening night, unimaginable for the performers and creative team that worked so hard. But now the wait is over and their work is finally on view, and it was worth the wait. You can see this gorgeous and unique re-imagining of the classic opera La Bohème at the Ritz Theater in Northeast Minneapolis through February 27 (click here for more info, detailed schedule, and COVID safety policy).