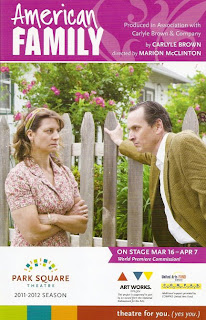 American Family.  That's kind of a loaded title.  These days the definition of "American Family" is pretty broad; family is what you make of it.  But in 1964 that definition was much narrower.  A family that's made up of a divorced white woman and her daughter, a black man, and their mixed race child, had a hard time existing anywhere in 1964, much less in Alabama.  Such is the subject of the new play commissioned by Park Square Theatre and written by Carlyle Brown.  And the result is a heart-wrenching exploration of family, love, betrayal, pride, prejudice, and the long-lasting effects of childhood injuries.

The central character in this family and this story is Mary Ellen, a 9-year-old girl in 1964 (played by the delightful star-in-the-making Megan Fischer, aka Annie).  The story begins as the adult Mary Ellen (the very talented and appealing Tracey Maloney, a newcomer to Park Square but a veteran of the Twin Cities theater scene) returns to her childhood home on a mission.  She meets and interacts with her younger self, and watches from the sidelines as her young life is changed for good, but not for the better.  Tracey and Megan mirror each others movements and expressions so that they really do look like they could be two versions of the same person.  Except that the grown-up Mary Ellen has lost much of that spark, that confident feeling of youth that everything is ahead of you and nothing can hurt you.  She knows what a tough road young Mary Ellen has in front of her and tries to warn her, even though she knows she must live through it.

In the first act, we watch along with the adult Mary Ellen as her mother (the sympathetic Noël Raymond, who directed Tracey last year in The Pride at Pillsbury House Theatre) marries Jimmy (a likeable Gavin Lawrence, who will next play Langston Hughes in the next Carlyle Brown project) and they move in with Jimmy's parents on their farm.  Grandma Richardson (the great Greta Oglesby) quickly warms to her new white granddaughter, but grouchy old Grandpa Richardson (played by the playwright himself), who is opposed to the marriage because of the difficulties it brings, takes a little longer to be "charmed" by the spirited young girl.  Just when the family seems to have settled into a kind of happiness, Mary Ellen's biological father (John Middleton, playing an unlikeable jerk) shows up to take her away, which is where the heartache (and need for tissues) begins.

The second act shows us what happens when the adult Mary Ellen meets her 16-year-old brother (Michael Terrell Brown, a promising young talent), whom she only knows from her mother's letters.  Tommy grew up in the shadow of the memories of his older sister, even though he never met her.  Both have assumptions about the other that prove to be incorrect.  Tommy's life is not easy, despite living the life that Mary Ellen wished she had, and Mary Ellen doesn't conform to the image in Tommy's head of his missing and much-missed sister.  Maybe it's too late to undo the hurts that have been done, but you can't help but wish for healing in this American family as the play ends.

I found this play to be a really moving look at a family that tries to survive when the whole world seems to be against them.  It's playing at Park Square through April 7 (if you go, be sure to bring tissues!).  And I look forward to seeing Carlyle Brown's play Are You Now or Have You Ever Been..., about writer Langston Hughes, playing at the Guthrie Studio Theater in May.