"Proof" at the Cabrillo Playhouse in San Clemente, California 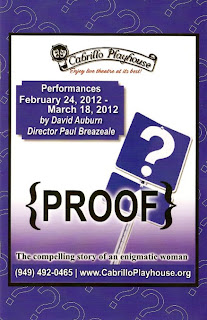 I found myself in Southern California last week on a business trip.  What should I do in a strange town in the evening?  Go see some local theater, of course!  About 60 miles south of L.A., San Clemente is a little beach town known more for surfing than for theater.  The only theater in town is the Cabrillo Playhouse, which began in the 1950s as the San Clemente Community Theater.  Just my luck - they were doing a production of one of my favorite math plays, Proof (my other favorite math play being Tom Stoppard's Arcadia, of course).  And since it was the week of pi day, it couldn't have been more appropriate.

Proof premiered on Broadway in 2000 and won the Tony for Best Play.  I saw it on tour in 2002, which is proof (sorry) of it's popularity since Broadway plays don't go on tour as often as musicals.  It tells the story of a young woman named Catherine whose father, a renowned mathematician, has just died.  She took care of him in the final years of his life as his mental health deteriorated.  In that time he filled 100 notebooks with gibberish, or is it mathematical genius?  Similar to the movie A Beautiful Mind (based on the biography of mathematician Jon Nash), he sees patterns and codes everywhere, and it's difficult to decipher the difference between madness and genius.  One of his former students, Hal, comes over to the house to go through the journals to see if there's anything of value.  At the same time, Catherine's sister arrives from New York and tells her she's sold the house, and wants Catherine to move to New York with her.  When Hal discovers one beautiful, complicated, ground-breaking proof, Catherine says that she wrote it.  No one believes her since she's had little schooling; she dropped out of college to take care of her father.  It's obvious she has inherited her father's mathematical skill, but has she also inherited his mental illness?  Proof a beautifully written play about relationships, truth, and discovery, in addition to math.

The Cabrillo Playhouse is a tiny little theater, and I found it completely adorable.  The theater itself seats about 60, and this being California there's also a lovely outdoor patio where free drinks and snacks are served before the show.  It has a real warm community feel.  The cast does a pretty good job with the play.  Patrick Radoci effectively conveys the increasing craziness of Catherine's deceased father (appearing in dreams and flashbacks), despite being 20 years too young for the role.  Adam Reeves is appropriately adorkable as Hal, who plays in a band with a bunch of math geeks (they have a song called "i," where they stand on stage in silence for three minutes).  Emily Lappi is amusing as the seemingly shallow sister from the big city who swoops in to take care of everything.  And Jennifer Whitney is sympathetic as Catherine, a young woman struggling to figure out what to do with her life now that she's free to choose.


The moral of the story is that if you find yourself in a strange town with nothing to do, why not check out the local theater scene?  My next trip is Chicago, which has a few more theaters to choose from than San Clemente.  The hard part will be narrowing my choices down to one or two.  If anyone has any suggestions, I'd love to hear them!