"Beautiful Thing" by Theater Latte Da at the Lab Theater 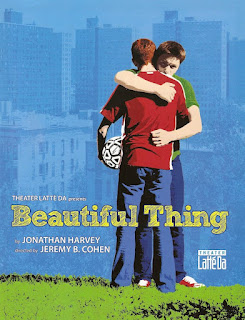 This song by the 1960s group The Mamas & the Papas closes Theatre Latte Da's production of the play with music, Beautiful Thing.  It's a beautiful and hopeful ending to the show and really gets to the heart of what it's all about.

Beautiful Thing tells the story of two teenage boys in a working-class neighborhood of London who fall in love.  Jamie lives with his single mother who works at a pub, and is struggling to fit in with his peers who think he's "weird;" even his own mother tells him that.  Ste lives next door with his abusive alcoholic father, and sometimes takes refuge at Jamie's place when things get too bad at home.  On the other side of Jamie lives Leah, who has been kicked out of school and spends all her time listening to and singing along with the music of Mama Cass.  She's a bit of a jerk, but it soon becomes apparent that she's lonely and struggling to find her place in the world, just like the boys are.  And when Jamie and Ste find their place in the world through each other, it truly is a beautiful thing.  Jamie's mother is upset when she finds out about the boys' relationship, but comes to accept it.  She may not be the best mother (at one point literally rolling around on the ground with her son as they fight), but she loves her son and does the best she can for him.  We never see Ste's family, but from the way they're talked about it's hard to believe they'd be very accepting.  I like to believe he somehow escaped from their orbit.

Beautiful Thing reminds me a little bit of the movie Billy Elliot (later turned into a stage musical): a young boy from a working class family in England finding himself in an unconventional way.  But while Billy falls in love with dancing and his own artistic expression, Jamie falls in love with Ste, and is able to figure out who he is through that love.
Because this is Theater Latte Da, there is music in this play, and the music conveys what mere words cannot.  Erin Schwab embodies Mama Cass and walks through the scenes, singing and bringing to life the songs in Leah's head, accompanied by the fabulous band hidden below the set.  Before seeing this show I was only marginally familiar with The Mamas & the Papas, and even less so with Mama Cass.  She is a fascinating character herself, and yet another incredible voice who left this earth way too early (she died at the age of 32).  I'm enamored of the sound and the look of the 1960s, so it's not too surprising that I just downloaded the soundtrack from the 1996 movie version of Beautiful Thing (plus a few additional songs that weren't included).  Here's a way that Theater Latte Da could improve (something I thought impossible) - offer downloads of songs from their shows.  I would definitely buy a soundtrack of this show featuring the songs of Mama Cass in Erin Schwab's fabulous voice (with Dennis Curley's lovely harmonies). 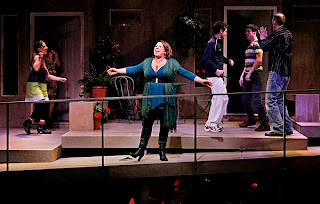 As with all Latte Da shows, this show is perfectly cast.  (And they all do such a great job with the working-class London accent that I really had to pay attention to catch what they were saying, not to mention learning new words such as slag and knackered.)  Steven Lee Johnson (a student with the esteemed U of M/Guthrie program) and David Darrow* (who recently moved here from NYC, where he won an Innovative Theatre Award) are perfect as the young lovers Jamie and Ste, believable and natural and sympathetic.  Anna Sundberg (one of my favorite artists of 2011) is, as usual, fully committed to creating a distinct and layered character.  Jennifer Blagen gives depth to Jamie's tough-talking mother, and Dan Hopman is charming as her boyfriend of the moment, who's also pretty nice to the kids.

This is the first Theater Latte Da production not directed by Artistic Director Peter Rothstein; he handed the reigns over to Jeremy B. Cohen.  I also don't remember a show without Denise Prosek as musical director (Dennis Curley takes the baton here).  And if I hadn't known it, I would never have guessed it was anyone other than Peter and Denise pulling the strings (I think that's the biggest compliment I can give).  The set (by Michael Hoover) is really cool (and smells of new construction).  It consists of the outside of three side-by-site flats, elevated to allow room for the band below, with some scenes occurring on the floor in front.  The Lab Theater is such a great space.  Big and open, allowing for any number of diverse worlds to be created within it (I'll next be seeing The Moving Company's new work Werther and Lotte there).

This play was written almost 20 years ago, but is still timely with the recent rash of gay bullying, and the impending vote on the Minnesota Marriage Amendment.  Jamie and Ste's relationship is like any other young love - unsure, passionate, hesitant, sweet, and true.  Maybe I'm dense, but I just don't see how that could be a threat to anyone.  Theater Latte Da has allowed students and their parents to see this show for free, as a way to facilitate conversations and healing.  That is most definitely a beautiful thing.

Check out this video trailer for the show.  And then order your tickets here (playing now through March 18).
Beautiful Thing trailer from Theater Latte Da on Vimeo.

*I have been looking forward to Theater Latte Da's final show of the season, Spring Awakening, since their season was announced last summer.  I think it's one of the best new musicals of the last decade, and I'm really excited to see what Peter Rothstein and Co. do with it.  David Darrow (Ste) will make an excellent Melchior, opposite Cat Brindisi (who sang "Mama, Mama, Mama" so beautifully in Spelling Bee last year that I can easily imagine her singing "Mama Who Bore Me") as Wendla, with the very talented Tyler Michaels (aka Snoopy in You're a Good Man Charlie Brown) as my favorite character Moritz.  Definitely a show not to be missed.

Celebrity Sighting
I believe that was Reid Harmsen working in the lobby of the Lab Theater.  Reid has appeared at the Lab as Brad in The Rocky Horror Show, and as my favorite character Mark in RENT.  Update: it was indeed Reid; I saw him again a few weeks later and introduced myself.  He said he reads my blog all the time and was very sweet.  It was so nice to talk to him and I look forward to seeing him onstage sometime soon!