"The Birds" at the Guthrie Theater 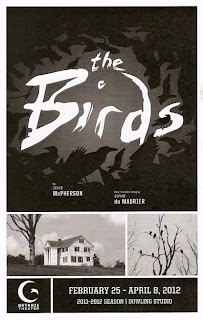 My current favorite TV show is AMC's The Walking Dead, about a small group of people trying to survive a zombie apocalypse.  I'm not a fan of zombies or horror in general, but for me the show isn't about the zombies.  It's about this group of people who have to figure out a new way to live in a world where the old rules of civilization no longer serve.  The play The Birds* (based on the original short story by Daphne du Maurier, not the 1963 Hitchcock movie) is the same way.  It's not about the birds (which are never seen, although the sound of them is frightening enough), it's about these people who are trying to survive and have some kind of a life when the world has been taken over by killer birds (crazy idea, isn't it?).  The old rules of life no longer apply; as one character says, "all bets are off."

The play begins in an old farmhouse where Diane and Nat, who met a few days ago on the road as they were trying to get away, have taken shelter.  Nat is ill and Diane nurses him back to health.  They develop a sort of rhythm of going out and scavenging for supplies between bird attacks (every six hours, based on the tides).  An injured young woman named Julie shows up on their door and they take her in, and she becomes part of their group.  They enjoy a certain friendship, but it becomes apparent that they don't really know each other very well.  Can they trust each other?  They notice a reclusive farmer across the lake, but he doesn't seem friendly so they avoid him.  One day when Nat and Julie have gone to town, the farmer visits Diane and asks her to join him so he can "take care of her."  She rejects him and he leaves.  Meanwhile, Nat and Julie have grown closer, which upsets Diane.  She's a writer who is keeping a journal, and we occasionally hear bits of her journal in voiceover, which lets us see into her thoughts a little.  Diane goes to extreme lengths to ensure survival.  What bothers me most about The Walking Dead is that in the face of a zombie apocalypse, the survivors need to band together against the zombies if the human race has any hope of surviving.  Similarly, I wanted everyone in the play to work together; it's the only way they can survive.  But as Diane says, "what's so great about the human race anyway?"  The humans still have to deal with each other, which proves to be the more difficult task.

Diane and is really the core of the story; we experience the events through her eyes.  And Angela Timberman is a wonderful grounding force as she takes us through this journey.  She's so good at both comedy (see Annie, where she stole the show as Miss Hannigan) and drama (I still remember her in Third several years ago, which is one of those plays that has stuck with me); she definitely uses her drama chops here.  J.C. Cutler, last year's Scrooge, is her equal as Nat.  Summer Hagen also give a fine performance as the seemingly sweet but can-you-really-trust-her Julie.  Last but not least, Stephen Yoakam (magnificent in last summer's Burial at Thebes) makes a short but very memorable and creepy appearance as the farmer. 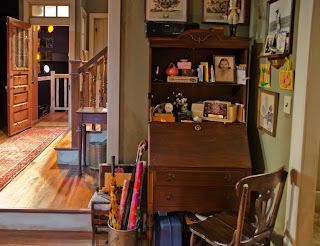 This was perhaps the most detailed set I've ever seen (designed by Guthrie newbie Wilson Chin).  When I walked into the Guthrie Studio Theater, I wanted to climb right up on the stage and explore the house.  Every corner was crammed with old photos and knick-knacks, children's artwork hung on the walls of the kitchen, and the walls were faded and dingy.  It not only looks lived in, it looks as if it's been lived in for a hundre years.  The play is performed with no intermission which I think was a smart choice.  With a story this intense and close, you don't want to let the audience out to walk around and breathe, but rather keep them feeling trapped along with the characters. 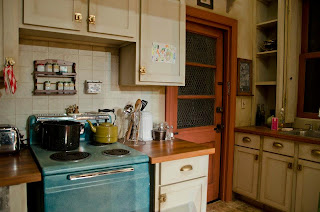 The Birds is playing now through April 8.  Check it out for a good old-fashioned thrill.  You might also come out of the show thinking about just what you would do to survive in a world where killer birds or zombies (or any number of natural disasters) have reduced the world to a dangerous, scary place.
*I received two complementary tickets to attend The Birds as part of the Guthrie's "Blogger Night."  And I owe them a big thanks this time because I forgot to RSVP, but when I called the day of the show they were able to get me in.  I love the Guthrie!