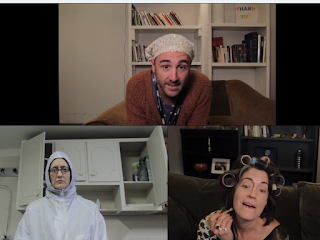 The Moving Company is remounting their absurd comedy Liberty Falls 54321 as a four-part web series called Liberty Falls 2020, and I couldn't be happier about it. We revisit the specifically odd characters from the play (last seen in early 2017) in the specifically odd year that is 2020. The first three episodes are free to view, and if you like what you see, the fourth episode can be viewed for only $6.99. The talented and hilarious original cast (plus a few welcome additions) has reunited in creative ways to bring us wonderfully silly story, not without some social commentary. Click here to watch.

The fictional town of Liberty Falls, Wisconsin is an interesting place. The play was all about a performance to reenact the founding of the town for its oldest resident, the 100+ year old Liberty Rose (who's just a horrible person). Now, in 2020, the focus is planning for the "annual proclamation of emaciating reenactment pageant," which they've scheduled for November 3. Nothing else happening that day, right?

It's March, the beginning of quarantine - remember that? Our friends gather on a Zoom call (see photo above) to start planning the pageant, including friendly volunteer Tamara (Nathan Keepers), taciturn Carmel (Christina Baldwin), real housewife Francine (Jennifer Baldwin Peden), her husband Dale (Randy Reyes), their son Casey (JuCoby Johnson), the old lady Liberty (Steven Epp), her granddaughter Serendipity (Heidi Bakke), and Dipity's out of town husband Tracy (Dom Wooten). About the only thing they accomplish is realizing why Nov. 3 sounds so familiar - it's election day (selection day?), and the cafe-nasium (combination cafeteria/gymnasium) is double-booked. What to do?!

Episode 2: From A Distance

It's now July 5, and lockdown has eased a bit, meaning outdoor, distanced, masked activities. So the group gathers in a park to continue planning, while Dale and Casey clumsily and awkwardly throw balls at each other. Liberty and Dipity are there too, along with Liberty's caregiver Stacy (Joy Dolo). Carmel suggests, and hilariously tries to explain, livestreaming the pageant, but they need a quorum to vote. Everyone comes together, and what are we voting on again? Plus, Serendipity has a big announcement.

Episode 3: Isn’t There Something Else Happening?

The big day is finally here, November 3, proclamation of emancipating reenactment pageant day! Oh and it's also selection day. Our friends have gathered at the cafe-nasium (aka the basement theater at Calvary Chuch) to livestream the pageant, appropriately masked and distant (mostly). Tamara and Carmel discuss how there's so much on the line this year, "we don't want to mess this one up!" Francine appears in rollers and full make-up, along with her family, and the DJ from previous pageants, DJ (Gabriel Murphy), and his assistant JD (Jay Eisenberg), are there to do the music. Finally the guest of honor Liberty Rose, along with Stacy and a very pregnant Serendipity, join the rehearsal, and we go live!

It's the day after the big day, and everyone is gathered around Serendipity's newborn baby in the cafe-nasium, exclaiming their beauty and discussing possible names (including Possibility). Later, Carmel and Casey have a discussion about birds and bees and take a big step in their sweetly awkward relationship, which is a bit shocking to Casey's parents. Meanwhile life partners DJ and JD get to know Tamara, and Liberty holds her great-grandbaby. The group manages to touch on some pretty big topics like gender, ethnicity, where one comes from, feeling like one doesn't belong, and systemic disenfranchisement. It's all done in sort of veiled and humorous way, but is really touching and kind of sweet. Finally we find out who everyone voted for - the old white guy.

The series is written by Nathan and Steven and cast, directed by Dominique Serrand, edited by Ryan Melling, with music by Peter Vitale. Check out the trailer below, and find links to all episodes here.