Two Lauren Gunderson Plays: "The Catastrophist" by Jungle/Round House/Marin Theatres and "I and You " by Steppingstone Theatre

After a particularly difficult week (rising COVID cases, vaccine side effects, the continued murder of Black people by the police, mass shootings, i.e., just another week in America) I took a much-needed hiatus from my phone today and instead spent some time at my church - theater. Specifically, I streamed two plays by one of my and America's current favorite playwrights, Lauren Gunderson (she's one of the most produced living playwrights in recent years; I saw two of her plays in February 2020, just before this extended intermission began). In the last year or so of virtual theater, I've found that I love watching theater in the morning - 7am or earlier, first thing when I get up while I eat breakfast, before doing my morning zoom yoga. It's a wonderful way to start the day. I began my phone-less theater-filled day with Lauren's newest play, The Catastrophist, a Jungle Theater co-production with DC's Round House Theatre and San Francisco's Marin Theatre Company. Then, after yoga and a lovely bike ride around my neighborhood, I watched I and You over lunch, produced by Steppingstone Theatre, which has recently joined forces with Park Square Theatre. The two plays are quite different, but share similar themes as well as Lauren's smart, clever, witty dialogue and realistic characters (one of whom actually is real). Both plays are under 90 minutes and really great choices for your stay-home-stay-safe-stream-some-theater week.

The Catastrophist, a Jungle Theater co-production with Round House Theatre and Marin Theatre Company (streaming through May 2 for $25 per household) 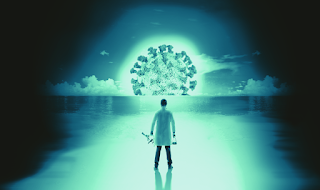 The character in this solo show is based on Lauren Gunderson's husband, who happens to be virologist Nathan Wolfe, who studies immunology and infectious diseases. (Wow, that's timely; if only world leaders had listened to his TED Talks and read his books, we might not be in this mess.) This play takes place prior to this current pandemic, in 2016, around the time of the Ebola outbreak. Part fascinating TED Talk about viruses (see also this John Oliver piece on the origins of pandemics) and part very personal story, it's an incredibly engaging and moving play. Written in a very clever meta way, the character (played by William DeMeritt with much humanity and truth) talks about how he's in a play that's written by his wife, and often offers asides from her (she says, she wants you to know). It's a beautiful play that's dynamically directed and filmed (director Jasson Minadakis, director of photography and editor Peter Ruocco). With multiple camera angles, sometimes with several different angles appearing on screen at once, and movement of the actor around the empty stage, sometimes looking directly into the camera at the audience, it's always captivating and never boring; truly the height of virtual theater-making technique. This world premiere new play that starts out about science becomes a play that's also about family and grief and relationships and legacy, all the things.

I and You, by SteppingStone Theatre (streaming through April 24 for $13 per household) 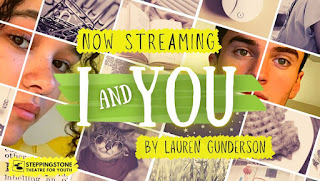 I and You premiered in 2014 but is a perfect choice for these pandemic times. The two-hander takes place entirely in a teenager's bedroom, easily translated to the zoom theater world. Caroline (Victoria Pekel) and Anthony (Quinn Morrissey) are in separate boxes on the screen, but it's easy to believe they're in the same room with each other. Caroline is unable to attend school, sick and awaiting a liver transplant. Anthony surprises her by coming over and asking for help on his school project about Walt Whitman, specifically his use of the pronouns "I" and "You" in his poem Song of Myself (you can read it in its entirety here). What follows is a funny, awkward, real conversation that ranges from death to sex to music to snacks. These two characters feel like real teenagers, and the actors are both appealing and honest, creating a believable chemistry between them despite the fact that they're in different locations. The spend most of the play looking into the camera, except for a few moments when they turn to look "at" each other, creating a feeling of intimacy (direction by Mark Ferraro-Hauck). Each of the several scenes appear to have been recorded in one long take with no breaks, an impressive feat for the young actors that contributes that live urgent feeling of theater. The two spaces are decked out similarly, with a couple of paired lighting effects that work well, and some playing of music that's important to the story (lighting and sound design by editor Nat Gilsdorf). SteppingStone is marketing this as a play for teens (they rate it PG-13), and there's an educator guide and classroom pricing, but it can be thoroughly enjoyed by adults (like this one) too.

'Tis the season for lots of productions of Lauren Gunderson's work, and I couldn't be happier (see also Lyric Arts' new virtual production of The Revolutionists available this Friday through May 2). What I love about her plays is that she's able to blend the grandest heady themes of science (or poetry) with incredibly intimate emotional stories of humans, and somehow they each inform the other, making them both all the more profound and meaningful. These two plays, while different, are two great examples of her work and why she's so popular, with two productions that, while different, really bring out what's great about her writing, proving that it can transcend live theater into the virtual space without losing any of the magic. And both plays have a twist or two that make you realize they're not really about what you thought they were about. If you're missing theater, watch one or both of these beautiful plays.