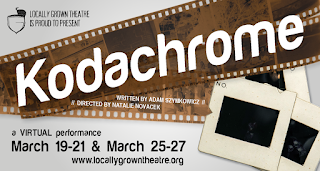 One good thing to come out of this extended intermission from live theater is discovering new theater companies. I had not previously heard of Locally Grown Theatre, a community theater in "Cottage Grove, St. Paul Park, Newport, Grey Cloud Island, and the surrounding area," but this week I watched a virtual play in the zoom style of theater and quite enjoyed it. Kodachrome is a sweet little Our Town-ish play about life in a small town, with all the mundanity and profundity that entails. Even though they're each performing in their own little box, the seven-person cast (although disappointingly lacking in diversity) all give wonderful performances that create a feeling of community in this story of love and loss.

Like Our Town, Kodachrome has a narrator, in this case a photographer, that introduces us to the residents of the town, in this case called Colchester. Played by Rachel Bentley with a Kellie Martin-esque likeability, the photographer shows us characters referred to as the librarian, the gravedigger, the hardware store owner, the waitress, with everyone else in the ensemble playing multiple characters (Jackson Whitman, Ross Harris, Emma Steincross, Joe Johnson, Allison Hawley, and Regan Carter). The varied and interwoven love stories range from hopeful to unrequited to grief-stricken, and the photographer's relationship to these people gradually comes to life throughout the play, until the wistful ending.

Under director Natalie Novacek (Artistic Director of Loudmouth Collective, which sadly is no longer), the scenes flow smoothly from one to the other, and the slightly comic yet poignant tone is consistent. A wide array of virtual backgrounds set the scene from the town park, to the town graveyard, the library, the hardware store, a diner, and more. The actors change their appearance for their multiple characters with wardrobe or accessory changes, and do so with such success that I thought there were more than seven actors.

Unfortunately I'm coming to this one late, and there is only one performance remaining, tonight at 7:30. Click here for more info, and keep your eye out for more from Locally Grown, especially if you live in the Cottage Grove area.