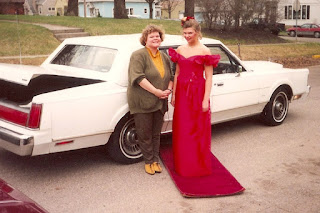 For your safe-at-home theater viewing, #TCTheater artist Jen Maren (perhaps most well know for playing the infamous Minnesota murderer and arsonist Marjorie Congden in History Theatre's smash hit original musical Glensheen) has adapted her solo show Live From New York, He's A Prom Date! to the streaming environment. Written and directed by her husband Pete Simmons, the show tells the story of when Jen's mom called the Sally Jessy Raphael Show and got them on the show for an episode about moms upset that their daughters weren't asked to prom. Yes, that actually happened, and yes, it's just as awful and cringe-worthy as you think. Jen plays all of the characters as she tells this story, which is as hilarious as it is poignant in her description of her relationship with her mom.

Here's what I wrote about the show when I saw it at the 2017 Minnesota Fringe Festival:

"I laughed and winced for an hour, and ended it with tears in my eyes. In what is really a love letter to her mom who "loves her recklessly," Jen tells her story with great drama and flair. Her mom just wanted her to be happy, so in 1992 she responded to a plea from Sally for girls who didn't have a date to prom. Jen (a budding performer who thought this might be her big break) and her mom flew to NYC, signed a contract, and were told what to say, how to act, and what to wear. Photos and clips from the show are displayed on a video screen, as Jen writhes in horror in a robe eating M&Ms and drinking wine from the bottle. She doesn't talk about the inherent misogyny, strict gender roles, and heteronormativity of the prom itself (no I'm not bitter that I never went to prom, it's true, prom is horrible!), that could be an entire show unto itself. Rather this show is a memoir in story and song of what it's like to be a young person growing up in this world, and how, if you're lucky, your parents do what they think will make your life better and happier, even if it does the exact opposite."

This show is pretty much the same as the Fringe version, except that Jen is live in her home studio talking to the camera, while the images and video play on a box in the screen (tech run by Pete). She exaggerates the attitude of her teenage self with all the grunts and groans of exasperation, and also brings warmth and humanity to the role of her mother as she describes how much she loves her children #bringtissues. The tech elements all run smoothly, and Jen is dynamic in her performance as she moves around with energy and emotion, telling this story that is almost too bizarre to be true!