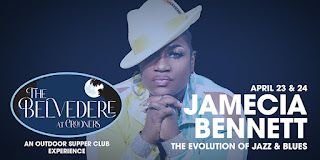 After a long winter of no live in-person entertainment, spring has finally arrived, a hopeful spring which is bringing us vaccines and the return of outdoor entertainment! Even before living under the specter of a deadly airborne virus, outdoor entertainment was one of my favorite things about summer in Minnesota. Now, when outdoors feels like the safest place to be, outdoor venues are even more important to our arts and entertainment industry. Last summer, Crooners Supper Club in Fridley stepped up with an outdoor drive-in performance venue and it was a life-saver for me; I attended four drive-in shows, plus one on their outdoor patio. This year, they've expanded that intimate outdoor patio into a larger space with appropriately spaced table seating under a tent. Called "The Belvedere," it's a great venue for outdoor entertainment that I hope they keep going for years to come. I can think of no one better to christen this new space than the incomparable Jamecia Bennett, local music and theater legend. I was lucky enough to experience one of her two shows last weekend, and if this is any indication, it's sure to be a fantastic spring/summer/fall at Crooners!

Jamecia began the show promising to "sing you stress-free." She acknowledged that it's been a rough couple of weeks in Minneapolis, with the recent death of 20-year-old Daunte Wright at the hands of police, and the ongoing trial for the murder of George Floyd which just a few days earlier delivered a guilty verdict on all three counts. But "music is healing," and "jazz is musical conversation," and that's what she delivered in her show - music, healing, conversation, and community.

Over two-plus hours, Jamecia performed a number of jazz and blues standards and originals with a fabulous six-piece band and three backup singers. Included in her band were several musicians from McNally Smith College of Music, which closed a few years ago. Jamecia could perform with literally any musicians in town, but she chose to support these young musicians, all of whom are incredibly talented. She also gave space for her nephew (either actual or metaphorical), the drummer, to share his work as well. It's pretty great to see a legend of the local music scene supporting the next generation of artists.

I've seen Jamecia in a number of shows around town, but never in a solo concert like this. It's quite the experience. With Jamecia, every song is an event. You might think you know the song she's about to sing, but she brings such unique styling and perspective to everything she sings that it's unlike any rendition you've heard before. She opened the show with "Summertime" from Porgy and Bess, a song that went on for at least ten minutes, including morphing into and out of "Sweet Dreams (Are Made of This)" and an impressive scatting section. She's just such an original, with such incredible talent and control over her instrument. It's a little difficult to know when to applaud, because just when you think the song is over it keeps going. She keeps the audience on its toes and in the palm of her hand.
Throughout the show, Jamecia mentioned various inspirations, influences, and experiences, including performing with the Grammy-winning group Sounds of Blackness and on various theater stages around town, including recently being named one of the Ordway's first resident artists. Jamecia also announced that her hit show Marie and Rosetta (co-starring Rajané Katurah) will be returning to Park Square Theatre next season.The Belvedere is a great new venue. I was there on a lovely but chilly evening, so the sides were enclosed with clear plastic, and there were some heating lamps. As the weather warms up, the sides will be removed allowing for more air flow and a better view of the lake. Tickets are sold as tables of 1, 2, and 4, with general admission seating (although you are led to a specific table when you arrive, I'm not sure how that's arranged). Doors open an hour before showtime, with full dinner and drink service available (several delicious vegetarian options available, unfortunately not much for vegans on the menu). Click here to see the full line-up, with shows currently scheduled through early July and more sure to be added (including upcoming shows by #TCTheater artists Jennifer Grimm and Leslie Vincent).
I have such hope this summer, hope for increasing numbers of the vaccinated and decreasing numbers of new COVID cases, hospitalizations, and deaths. And with that follows the possibility for lots of outdoor, and maybe soon indoor, live entertainment. We need this; our artists need this, our economy needs this, our community needs this, our souls need this. Let this wonderful evening of outdoor music be the beginning of the healing we need.