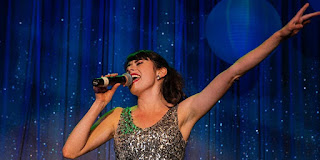 I paid my third visit to Crooners MainStage Tent last night; for someone starved for live entertainment, it's been such a gift. Dinner and a show, great live in-person entertainment, listening and laughing amidst other human beings. It almost feels like normal life. But not quite, because I stay in my car (you would too if you drove a convertible), the staff are all wearing masks, and so are the people sitting at tables under the tent spaced well apart. We're not even close to being out of the pandemic woods yet, but moments like this give me what I need to keep trudging along. And when you have performers as talented as Leslie Vincent and her fabulous six-piece band, and a perfect Minnesota summer night, it's about as good as it can get right now, which is pretty great.

#TCTheater-goers probably know Leslie Vincent from her performances in musicals such as Jefferson Township Sparkling Junior Talent Pageant at Park Square Theatre, but you should also know she released her first album earlier this year, a dream she's had since she was a kid. It's a really lovely and jazzy album, with her gorgeously unique voice making these old songs seem new. She was backed at her release concert (postponed due to the pandemic) by the same six musicians who played on her album, led by the esteemed George Maurer on keys. There was plenty of time for each one of them to be featured, and they're all pretty impressive players.

Leslie started off her concert by singing the first three songs on her album, and for a moment I thought she was going to sing the whole thing straight through (a concept I love). But after track #3 "These Foolish Things," the title song, she started mixing things up. She did eventually sing all 10 tracks from the album, which also include "Ain't Misbehavin'," "The Nearness of You," and "Moon River," for which she accompanied herself on the ukulele. But she didn't sing them all in order, and she threw in a few surprises like "He's a Tramp" from Lady and the Tramp (a Disney song, but a jazzy one), Carole King's "You've Got a Friend," and an original duet she wrote with the other half of the duo The Champagne Drops, Emily Dussault, who was there to sing a couple of songs with her.

Throughout the show Leslie shared stories about what the songs mean to her, or why she chose them for her album, or how she discovered them; she has a charming and endearing stage presence in addition to being a talented vocalist. Hopefully we'll get to see her on a theater stage sometime in the not too distant future, but in the meantime, check out her album (available on Bandcamp).

ICYMI, here's a bit about my experience at Crooners. The stage is under a tent between the parking lot and Moore Lake. Also under the tent is spaced table seating for two or four, and bar seating. Just beyond the tent are 2-3 rows of drive-in car parking. You will be directed to your space, which allow at least six feet between cars, and the sooner you arrive the better your spot ("doors" open one hour prior to showtime). If you don't drive a convertible and would like to be out in the open air, you can bring chairs, or use the chairs they have there, and sit just in front of your vehicle. There is the option to tune in your car radio to the sound system, which didn't seem necessary to me for the music, but may help if the concert includes a lot of speaking, which was a little harder for me to understand. The protocol is, like at all restaurants and public spaces, to wear masks while not eating. Although I took mine off when sitting in my open car well away from others.

Crooners is offering a limited dinner menu for service at the tables, or in your car. I'm a vegetarian and there are a couple of options - the veggie flatbread, spinach artichoke flatbread (hold the prosciutto), and bruschetta are all very good, and delivered right to my car (I literally did not leave my car the entire night) in a take-out container. The bill is delivered towards the end of the show in the typical bill folder, which felt like too much touching things for my comfort level, but I had my hand sani handy as usual. I would love to see an online option for paying, to eliminate the need to pass objects back and forth.