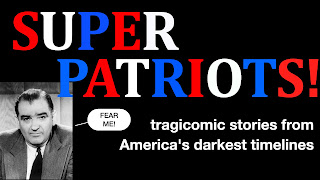 Summary: A short satire of two of the most super patriots in American history - Senator Joseph McCarthy and President James Buchanan.

Highlights: I found these two short pieces (written by Carl Danielson) to be very funny, well constructed, clever, and eerily relevant looks at history. The story of McCarthy (other main characters: LBJ and HHH) is told mostly with cutouts of the historical figures on sticks, as LBJ waits around for McCarthy to dig himself into a hole, because Americans would never put up with a demagogic leader. The second piece is in the now familiar virtual box format, and they use it well. We learn about Abraham Lincoln's predecessor, James Buchanan, known as a "doughface" - a Northern supporter of the Southern cause (i.e., slavery). Another entirely unpleasant example of history we would never repeat. Right?