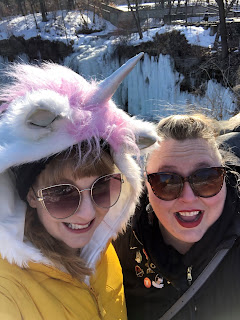 By: Special When Lit

Highlights: This was just a really fun show for the last night of the festival. Nissa Nordland and Lauren Anderson are both very funny women, and they work well together. The running gag was that since this was on the internet, who knows if anyone's watching, so they can do whatever they want with "no consequences!" Sketches included a spoof of a work zoom meeting with a surprise appearance, Lauren afflicted with "cool disease," Nissa singing a silly song, and my favorite - a Jane Austen spoof called "Dignity and Displeasure." And as a (former) clarinetist, I very much appreciated Nissa's playing between scenes, and her pre-show covers of such classics as "My Heart Will Go On" and "Music of the Night."