Minnesota Fringe Festival 2020: "Stuck in an Elevator with Patrick Stewart" 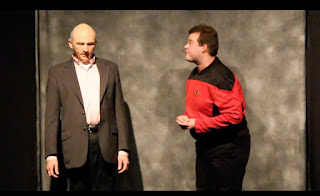 Title: Stuck in an Elevator with Patrick Stewart

By: The Theatre Cosmic

Summary: An imagined meeting between Patrick Stewart and a Star Trek fan at a 1988 comic-con.

Highlights: I'm not a Star Trek fan, so in last year's busy live in-person Fringe Festival with over 100 shows to choose from, this one didn't make my list. But I'm glad I had the opportunity to watch this recorded version. You don't have to be a Star Trek fan to enjoy it. Written by Brandon Taitt, it's a funny and surprisingly poignant story about the accidental meeting of two humans who seemingly have nothing in common (one a renowned actor frustrated with his situation, one a nervous teenager with an unhappy home life), but find a real connection. This fictional Patrick Stewart (a convincing George M. Calger) is not happy to be tied to a six-year contract on a silly television show, and having to pass up his dream stage role in Richard III. As the title suggests, he is stuck in an elevator with adoring fan Daniel (an endearing Brandon Caviness). At first it's a situation of - never meet your heroes because they'll disappoint you; Sir Patrick is a bit of a thoughtless jerk. But as the two dig deeper, they discover commonalities, and Daniel convinces Patrick that there is nobility in his Star Trek role, and that he and his friends' obsession with Star Trek as a way to find comfort and hope is not unlike young Patrick's obsession with theater. The camera work is not bad for this type of thing, with a few different angles, close-ups combined with wide shots, so that the live show translates fairly well to this format.