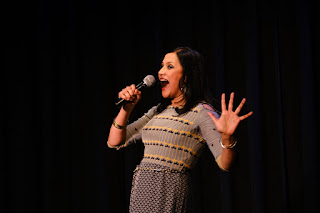 Summary: Storytelling by South Asian artists about immigration, home, childhood, and growing up.

Highlights: South Asian Arts and Theater House (SAATH), formerly known as the Bollywood Dance Scene, is a Minnesota Fringe success story. After doing their first Bollywood dance musical show in 2014, they became one of the most popular Fringe groups in history, formed a non-profit, and now support and produce South Asian arts all over town (including Bollywood dance workout videos on their YouTube channel which I'm totally going to check out). This live show was hosted by co-founder and Executive Director Divya Maiya and featured recordings of excerpts from two past Fringe shows. One was a story called "Crushed," about a young boy's love of cable TV, and eventually girls. The other was a story called "Home," about an immigrant missing his original home, and finding a sense of home where he is now (a story with extra poignancy once Divya reveals what happened after the performance). This is a great example of why we need Fringe, to help promote the voices of artists we often don't hear, and give them the tools to flourish on their own, as SAATH has done. I missed the live broadcast last night but was able to watch it this morning, using the link at the bottom of the Nightly Fringe page.