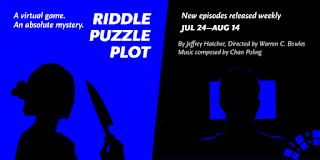 Original post from July 25, 2020:
Friends, I am beyond thrilled to post my first #TCTheater review in almost five months. Yes it's a virtual performance streamed over Zoom, so it's not quite the same, but it's a chance to see some of my favorite artists being creative and having fun, while putting out new content during a pandemic that doesn't seem to be getting any better. That's cause to celebrate. And it's not too late to get in on the action. Park Square Theatre's RIDDLE PUZZLE PLOT is a new play written for this format by one of my favorite #TCTheater playwrights, Jeffrey Hatcher, about a group of actors connecting over Zoom during a pandemic (how meta!). It will play out over four installments, beginning this weekend, with a $30 ticket getting you access to all episodes, either with live and interactive pre- and post-show content on Friday or Saturday night, or to watch on demand later in the week. I watched it last night and it was truly delightful, and such a comfort to experience something akin to theater again.

Episode 1 - The Arrival:
The premise is this: a group of actors has gathered on an island for the 20th season of the Mystery Island Old Dark House Summer Theater (which I would totally go to if it were a real thing). Because of the pandemic, the cast has a Zoom meet-and-greet on their first night on the island. There the Artistic Director Arno (E.J. Subkoviak) tells them that the show has been cancelled. They why are we here? wonder the other cast members, which include his ex Hilda (Shanan Custer), his harried assistant Petra (Aimee K. Bryant), diva Saskia (Sun Mee Chomet), the suave Chet (Rodolfo Nieto), recovering alcoholic and playwright Frye (Pearce Bunting), and newcomer Betty (Alessandra Bongiardina). They soon find out, and it has to do with the disappearance one year ago of their former cast member Verity. What happened to her is a mystery, one that the audience can play along with and try to solve along with the characters.

Episode 2 - What Nature Abhors (updated August 1):
I was eagerly anticipating the debut of episode two last night, as last week left us on a bit of a cliffhanger! I don't want to spoil anything for those who haven't watched it, but let's just say the mystery deepens. Not just the mystery of Verity, but some mysterious things happening to our characters today. We're still on the same never-ending Zoom call, but with a few diversions. Petra and others play recorded calls from the past (a sort of virtual flashback), Frye makes his way outside on a hunt for clues (with some delightfully Blair Witch Project-esque footage of Pearce Bunting), and Chet tells a story with puppets. It's still very entertaining and engaging, an innovative use of the format, that leaves me excited for the next episode.

Episode 3 - Who's Afraid of Stephen Sondheim (updated August 8):
This series just gets more and more fun. Again I don't want to spoil anything for those who haven't watched it yet, but these actors keep dropping like flies! Or do they?! The riddles continue, as do the delightful diversions. At one point we watched Frye's acting reel, which was actually Pearce Bunting's acting reel, which I need to watch again for all of the wonderful and surprising moments (not to mention the hair!). At another point the cast all joined in singing "I Say A Little Prayer For You." Both were ostensibly to provide background on our cast/suspects, but perhaps also just an excuse to showcase the abundant talent in the cast, and show the ways this technology can be used to amuse, entertain, and tell a story. The finale is next week, in which we'll find out who the murderer(s) is (are), but I'll be kind of sad when it's over.

Episode 4 - Mayhem! (updated August 15):
My live viewing of the final episode was interrupted a bit by the stormy weather interfering with my wifi signal. Fortunately Park Square makes the episodes available to watch later, so I can catch up on what I missed. But I saw enough to know that the murder(s) mystery was solved in a clever twist I didn't see coming. I loved everything about this four-part series; it was an ingenious use of this new way of doing theater. I love that it started as the Zoom meeting with which we've all become so familiar over the last several months, but then added other video clips as a way to break up the sameness of the people-in-boxes. The mystery was fun, but for me it was almost secondary to watching these actors perform in this way. The audience participation made it feel a little more like the social gathering we get in theater, with riddle contest winners appearing at the beginning of the show, and the cast members answering audience questions in character in private Zoom rooms at the end of the show. It was a delight from start to finish. More of this please!!

Original post from July 25, 2020 continued:
If you've seen a Jeffrey Hatcher-penned play, then you're familiar with his clever witty style. There's plenty of that here (one of several laugh-out-loud lines: "vamping around like you're a finalist in the Susan Lucci invitational"). And this cast is perfection, making the most of every line and situation from their own little box. It's really a credit to their talent that they can create these distinct characters and relationships while acting over Zoom. I don't know how many takes they did of this, but under director Warren C. Bowles (and Zoom technician Aaron Fiskradatz), it all feels seamless, with a consistent tone of  humor and mystery. It's a successful experiment in this new medium.

The show also features several riddles, some that are solved within the play, some that are left to the audience to solve. Turns out I'm horrible at riddles, but if you have a knack for it, you can email your answer to Park Square for a chance to participate in next week's show. Another interactive feature is a post-show discussion. Audience members are invited to a few different private chat rooms with the actors, who will answer questions in character. I was lucky enough to be put in the room with Hilda, and I wanted the Shanan Custer in-character improv to continue for longer than the allotted time!

These are challenging times in many areas of life, including our beloved theater community, which likely won't be able to return to business as usual for quite some time now. Kudos to Park Square for finding a creative way to continue their work, employ artists, and engage audiences.

Click here to find out more about RIDDLE PUZZLE PLOT and buy your ticket for this unique and fun theater experience.