"Minnesota State of UnFair" by Classic Alley Performers on YouTube 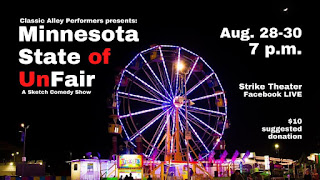 In another example of the performing arts adapting to this strange time, the sketch comedy group Classic Alley Performers has partnered with Strike Theater to bring us virtual performing arts, which they're calling "Minnesota State of UnFair." The 40 minutes of sketch comedy airs live on Strike's Facebook page this Friday through Sunday nights, but I got a sneak peek of this funny and topical show.

The eight person cast (Adam Mellerup, Christopher Allen Pitner, Jeremy P. Johnson, Katie Wilson, Matt Mills, Meredith Jacobs, Nicole Savick Weber, and Brian Scot, who also directs), solo or in small groups, presents a dozen or so recorded sketches, including some repeated characters. Topics (which surprisingly don't include the great Minnesota get-together) range from silly (birds in human situations) to serious (a Jeopardy 2020 game with categories that cover the range of 2020 traumas). There's the jerk that won't wear a mask and gets his payback when no one will answer his call for help, there's a bad first date quickly weeded out, there's a kid's science show interrupted by a science disbeliever, there's the best gender reveal over Zoom (oh Zoom, how we love and hate you). Some sketches are done which the performers interacting over Zoom or Facetime, some are with a couple people together in person, often in an outdoor setting.

"Minnesota State of UnFair" is a fun watch. I appreciate that it's not too long (I don't know about you, but I have a short attention span for watching virtual performances). It feels just the right length, with a nice variety of sketches in terms of topics and locations (although a greater diversity in the make-up of the cast would be appreciated).

For more information see the Facebook event page. The show is free to watch, but donations are welcome to support the artists.