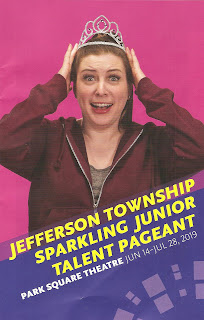 This summer, Park Square Theatre is all about supporting new works of music-theater created right here in #TCTheater. Last weekend saw the closing of one remount of a locally created new original musical (the gorgeous and moving dance musical about the Bosnian War, Heaven) and the opening of another remount of a locally created new original musical. More than a remount, this iteration of Jefferson Township Sparkling Junior Talent Pageant is an expanded version of the 2017 Fringe hit that has been doubled in length, fun, and emotion. Created by uber-talented young composer/lyricist/playwright Keith Hovis, Jefferson Township is a darkly hilarious and surprisingly poignant look at a group of millennials turning 30, as seen through a super creepy small town Minnesota youth pageant. It's extremely clever, very funny, and the super talented well-balanced quartet of actors are having so much fun that it's impossible for the audience not to have fun too. Jefferson Township Sparkling Junior Talent Pageant is the perfect fun summer musical.

The story begins when Frannie returns home to Jefferson Township, somewhere in outstate Minnesota, after failing at life in the Cities. She's living in her old room at her dad's house, with her new stepmom who doesn't like her, and is at a bit of a crossroads in life; let's call it a third-life crisis. She gets a job at the local grocery store, where she runs into her old friend Liam, who has never left town. They reminisce about the aforementioned talent pageant, which hasn't been held for 20 years due to a gruesome accident when they were both competing. They decide to resurrect the competition, Liam pulls in former football star and Frannie's high school crush Travis, who tells the reigning champion Val (milking every inch of her fame by doing local commercials), and suddenly the pageant is on! There's much sabotaging, strategizing, and hijinks as we progress to the train wreck of a pageant that takes up almost all of Act II. Without going into detail, there are blood effects designers (Tyler Olsen-Highness and Craig Kossen) listed in the program, so suffice it to say things don't go smoothly. But more importantly, Frannie realizes that the pageant isn't the answer to what she's searching for, and instead, maybe this newfound home, friends, and life is, if she can figure out how to make it work. Sometimes you can go home again, and sometimes you never leave.

The show is really well staged in Park Square's intimate thrust stage in the basement of the Historic Hamm Building, with director Laura Leffler using all sides of the space and even sending actors into the audience. She's also somehow managed to balance the almost campy and definitely over-the-top tone of the show with moments that feel grounded in real emotion. The excellent original cast returns, and they all just revel in the absurd material and enjoy playing with the audience. Kelly Houlehan is a powerhouse singer as Frannie, and really makes us feel Frannie's pain and want her to succeed. Leslie Vincent is a hoot as bad girl Val, fully committing to her delightful machinations. Ryan London Levin as Liam is a total ham, in the best way, and particularly good at making eyes at and engaging the audience. Zach Garcia brings warmth and humanity to the role of the amiable former jock Travis. The foursome are a really strong quartet (literally, in gorgeous harmony, and as an acting ensemble), very believable as friends/frenemies.

Keith Hovis has turned his clever and catchy score (sometimes the audience wasn't sure when to clap, which I consider a good thing) over to music director Brian Pekol, who plays percussion in the three-piece onstage band (also including piano and guitar). They're hidden behind a screen at the back of the stage for the first act, but then become visible and part of the show for the second act talent pageant. It took me a few songs to figure out if the actors were miked or not (they are), which means that the sound mix is perfect for the space, subtle and not overdone, a welcome respite after too many overblown musicals (thanks sound designer Jacob M. Davis). Choreographer Antonia Perez has created some fun movement for the cast, including the most charming dance with corded telephones (corded telephones!) that I've ever seen.

The design of the show is spot-on, and mostly relegated to posts in the four corners, each dedicated to one of the four characters. Frannie's is covered with movie and teen heartthrob posters, Val's is chock full of pageant memorabilia, Travis' corner represents his family mechanic shop and football mementos, while Liam's corner is the grocery store where he works (including cereal to munch on). The floor of the "cafetorium" where the pageant takes place is half basketball court, half recognizable cafeteria tiles. Take note of the too many clever details to mention, like the boys' basketball championship sign with one date (1954), and the girls' basketball championship sign with so many years it extends onto a second sign. The costume design is also very detailed and character specific, with some pretty hideous pageant costumes to boot. (Scenic design by Ursula K Bowden, properties design by Abbee Warmboe, costume design by Rubble&Ash.)

I enjoyed Jefferson Township when I saw it at the Fringe two years ago (although it didn't make my favorites list that year), but I love it even more now. The story, characters, and situation feel more fleshed out, and it feels much more grounded, relatable, and poignant, without losing that delightful zaniness. Even though I'm not of the millennial generation, everyone can relate to feeling lost, to looking for a change, to searching for home. You can visit Jefferson Township now through July 28.